The film will be available on Blu-ray in February.

In an early announcement to retailers, Magnolia is preparing to bring 'Life Itself' to Blu-ray on February 17.

'Life Itself,' the first ever feature-length documentary on the life of Roger Ebert, covers the prolific critic's life journey from his days at the University of Illinois, to his move to Chicago where he became the first film critic ever to win the Pulitzer Prize, then to television where he and Gene Siskel became iconic stars, and finally to what Roger referred to as "his third act"; how he overcame disabilities wrought by cancer to became a major voice on the internet and through social media.

Director Steve James ('Hoop Dreams') has conducted interviews with over two dozen people, including lifelong friends, professional colleagues, the first ever interview with Gene Siskel's wife, and filmmakers Errol Morris, Werner Herzog, Ramin Bahrani, Gregory Nava, Ava DuVernay, and Martin Scorsese, who is one of the executive producers along with Steven Zaillian.

Specs have yet to be revealed, but supplements include: Interview with Director Steve James, AXS TV: A look at Life Itself, and Deleted Scenes.

You can find the latest specs for 'Life Itself' linked from our Blu-ray Release Schedule, where it is indexed under February 17. 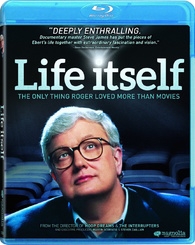