The horror flick is set to arrive on Blu-ray early next month.

In an early announcement to retailers, Magnolia will be releasing 'The Blood Lands' on Blu-ray on September 1.

It's Ed (Lee Williams) and Sarah's (Pollyanna McIntosh, Filth, The Woman) first night at their new home, an isolated farmhouse in the countryside. This should be a new beginning away from their stressful city lives. But as darkness falls, Sarah suspects they're not alone, Ed goes to investigate and quickly, the evening becomes a nightmare. It suddenly dawns on them they do not belong here. And they certainly aren't welcome either....

Specs and supplements haven't been revealed yet, but the suggested list price for the Blu-ray is $29.98.

You can find the latest specs for 'The Blood Lands' linked from our Blu-ray Release Schedule, where it is indexed under September 1. 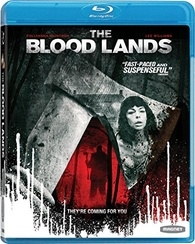