The winner of the Un Certain Regard Jury Prize at the 2014 Cannes Film Festival is now available for pre-order.

In an early announcement to retailers, Magnolia is preparing 'Force Majeure' for Blu-ray on February 10.

A Swedish family travels to the French Alps to enjoy a few days of skiing. The sun is shining and the slopes are spectacular but, during a lunch at a mountainside restaurant, an avalanche turns everything upside down. With diners fleeing in all directions, mother Ebba calls for her husband Tomas as she tries to protect their children. Tomas, meanwhile, is running for his life... The anticipated disaster failed to occur, and yet the family's world has been shaken to its core, a question mark hanging over their father in particular. Tomas and Ebba's marriage now hangs in the balance as Tomas struggles desperately to reclaim his role as family patriarch.

Supplements have not been revealed, but the Blu-ray will feature 1080p video and a Swedish DTS-HD MA 5.1 soundtrack.

You can find the latest specs for 'Force Majeure' linked from our Blu-ray Release Schedule, where it's indexed under February 10. 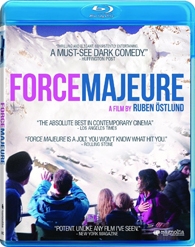 Discs mentioned in this article: (Click for specs and reviews)
Force Majeure (Blu-ray)