The double feature will be available on Blu-ray in October.

In an early announcement to retailers, Lionsgate says 'Waxwork / Waxwork II: Lost in Time' will hit Blu-ray on October 18.

Waxwork - Welcome to the Waxwork... the mysterious place where every picture tells a horror story. The private midnight showing is about to begin with the scariest bunch of drips you'll ever meet! Gremlins star Zach Galligan co-stars in this comedy of terrors with Deborah Foreman (My Chauffer), Miles O'Keefe (Tarzan), Michelle Johnson (Blame it On Rio), David Warner (Time After Time) and the special effects of Bob Keen (Alien, Hellraiser)!

Inside the wax museum, a group of teenagers are aghast at the hauntingly lifelike wax displays of Dracula, the Wolfman, the Mummy and other charter members of the horror Hall of Fame. Each display is perfectly grotesque, yet each is missing one thing... a victim! Admission to the Waxwork was free, but now they may pay with their lives! One by one, the students are drawn into the settings as objects of the bloodthirsty creatures. They are now part of the permanent collection. no movie you've ever seen before can hold a candle to Waxwork!

Waxwork II - Lost in Time - A killer is waiting - in the past, present and future. Looking for clues to a bizarre killing, a young couple bravely embarks on a terrifying journey through time in this action-packed sci-fi thriller.

Specs have yet to be revealed, but supplements include: Audio Commentaries with Anthony Hickox & Zach Galligan; "The Waxwork Chronicles" (Parts 1–6); Vintage "Making of" Featurette; Theatrical Trailers; and Still Galleries.

You can find the latest specs for 'Waxwork / Waxwork II: Lost in Time' linked from our Blu-ray Release Schedule, where it is indexed under October 18. 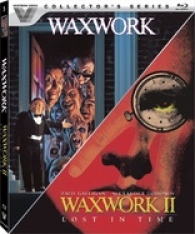