The war drama co-starring Tom Sizemore and Thomas Jane is set to arrive on Blu-ray in the new year.

In an early announcement to retailers, Lionsgate says 'USS Indianapolis: Men of Courage' will be available on Blu-ray on January 24.

The Blu-ray will feature 1080p video, lossless 5.1 audio, and supplements include a Making-Of Featurette.

You can find the latest specs for 'USS Indianapolis: Men of Courage' linked from our Blu-ray Release Schedule, where it's indexed under January 24. 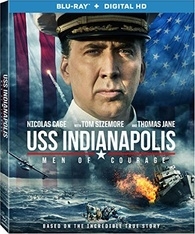