The action-thriller Starring John Cusack and Samuel L. Jackson is planned for Blu-ray in September.

In an early announcement to retailers, Lionsgate says 'Cell' will be available on Blu-ray on September 27.

Stephen King’s best-selling novel is brought to terrifying life in this mind-blowing thriller starring John Cusack and Samuel L. Jackson. At the Boston airport, Clay (Cusack) witnesses a scene of chaotic mayhem when an electronic signal turns hundreds of cell phone users into rabid killers. Desperate to find his estranged wife and son, Clay teams with a train driver (Jackson) to battle the horde of murderous “phoners” as the city descends into apocalyptic madness.

The Blu-ray will feature 1080p video, lossless 5.1 audio, and supplements include: Audio Commentary with Director Tod Williams and “To Cell and Back” Featurette.

You can find the latest specs for 'Cell' linked from our Blu-ray Release Schedule, where it is indexed under September 27. 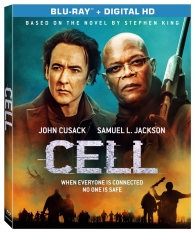