The surreal comedy starring Paul Dano, Daniel Radcliffe, and Mary Elizabeth Winstead will wash up on Blu-ray in October.

In an early announcement to retailers, Lionsgate says 'Swiss Army Man' will hit Blu-ray on October 4.

Written and directed by acclaimed music video directors Daniel Scheinert and Daniel Kwan (collectively known as DANIELS) in their feature film debut, the “wild and inventive” (The Huffington Post) storyfinds a hopeless man stranded in the wilderness who befriends a dead body and together they go on a surreal journey to get home. Winner of the 2016 Sundance Film Festival’s directing award and a New York Times Critics’ Pick, Swiss Army Man also stars Mary Elizabeth Winstead (10 Cloverfield Lane) and features music by Manchester Orchestra members Andy Hull and Robert McDowell.

Hank (Paul Dano) is stranded on a deserted island, having given up all hope of ever making it home again. But one day everything changes when a corpse named Manny (Daniel Radcliffe) washes up onshore. The two become fast friends, and ultimately go on an epic adventure that will bring Hank back to the woman of his dreams.

The Blu-ray will feature 1080p video, a Dolby Atmos soundtrack, and supplements include: a music-less audio track along with Q&A with the filmmakers, two behind-the-scenes featurettes, audio commentary with DANIELS and crew and deleted scenes.

You can find the latest specs for 'Swiss Army Man' linked from our Blu-ray Release Schedule, where it is indexed under October 4. 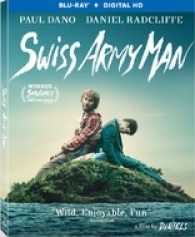