Pierce Brosnan Has an 'Urge' to Thrill on Blu-ray

The insane suspense thriller will be available on Blu-ray in September.

In an early announcement to retailers, Lionsgate says 'Urge' will hit Blu-ray on September 6.

A group of friends take a lavish weekend getaway to an island where a mysterious club owner (Brosnan) introduces them to Urge, a new designer drug that allows them to live out their wildest fantasies. But what starts out as a fun night of partying soon takes a sinister turn when their primal impulses become uncontrollable.

The Blu-ray will feature 1080p video, a lossless 5.1 soundtrack, and supplements include a behind-the-scenes featurette.

You can find the latest specs for 'Urge' linked from our Blu-ray Release Schedule, where it is indexed under September 6. 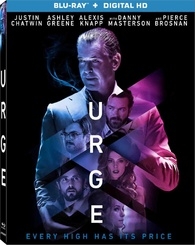