'Our Kind of Traitor' Starring Ewan McGregor Bound for Blu-ray

The John le Carré spy thriller is coming to Blu-ray in October.

In an early announcement to retailers, Lionsgate is preparing 'Our Kind of Traitor' for Blu-ray on October 18.

Who can you trust with the truth? Ewan McGregor and Naomie Harris are a couple drawn into a dangerous game of international espionage, caught between Stellan Skarsgard's money-launder, the Russian mafia, the British government, and Damian Lewis' ruthless MI6 agent.

Sepcs have not been detailed yet, but supplements will include: Deleted Scenes; The Making of Our Kind of Traitor; The Cast - Featurette; and The Story - Featurette.
Suggested list price for the Blu-ray is $24.99.

You can find the latest specs for 'Our Kind of Traitor' linked from our Blu-ray Release Schedule, where it's indexed under October 18. 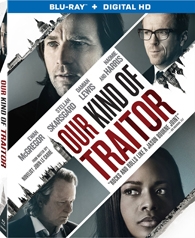 Discs mentioned in this article: (Click for specs and reviews)
Our Kind of Traitor (Blu-ray)