The thriller will materialize on Ultra HD Blu-ray in May.

In an early announcement to retailers, Lionsgate is preparing 'Now You See Me' for Ultra HD Blu-ray on May 31.

Mark Ruffalo, Woody Harrelson, Dave Franco, Morgan Freeman, and Jesse Eisenberg give astonishing performances in this visually stunning thriller from the director of 'Clash of the Titans.' As individual performers, these magicians are amazing. But once they join forces, they begin captivating an international audience with a series of bold, original heists—all the while pursuing a secret agenda that has the FBI and Interpol scrambling to anticipate what their next spectacular crime will be.

You can find the latest specs for 'Now You See Me' linked from our Ultra HD Blu-ray Release Schedule, where it's indexed under May 31. 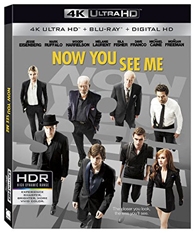 Discs mentioned in this article: (Click for specs and reviews)
Now You See Me - Ultra HD Blu-ray (Ultra HD)