The documentary on the acclaimed director is coming to Blu-ray in September.

In an early announcement to retailers, Lionsgate is preparing 'De Palma' for Blu-ray on September 13.

In this lively, illuminating and unexpectedly moving documentary, directors Noah Baumbach and Jake Paltrow engage in a personal and candid discussion with De Palma, exploring not only his life and work but also his singular approach to the craft of filmmaking and his remarkable experiences navigating the film business, from his early days as the bad boy of New Hollywood to his more recent years as a respected veteran of the field. In the end, what emerges is a funny, honest, and incisive portrait of a truly one-of-a-kind artist, and an exhilarating behind-the-scenes look at the last 50 years of the film industry through the eyes of someone who has truly seen it all.

You can find the latest specs for 'De Palma' linked from our Blu-ray Release Schedule, where it's indexed under September 13. 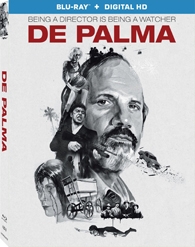 Discs mentioned in this article: (Click for specs and reviews)
De Palma (Blu-ray)