'Life on the Line' Blu-ray Announced and Detailed

In an early announcement to retailers, Lionsgate is working on 'Life on the Line' for Blu-ray on February 7.

As a huge electrical storm sweeps towards Texas, lineman Beau (John Travolta) is haunted by memories of his brother's death by lightning years earlier. Bailey (Kate Bosworth), the niece he helped raise, has a secret she needs to share with her boyfriend Duncan. But he and Beau's brave team are racing to replace miles of power cables before the tempest strikes. Also starring Sharon Stone, Life on the Line is a tribute to the heroes who risk it all to keep us safe.

The Blu-ray will feature a 1080p transfer, lossless 5.1 audio, and supplements include: "Life on the Line" Music Video by Fiona Culley featuring Darius Rucker and Behind the Scenes with Cast/Crew Interviews.

You can find the latest specs for 'Life on the Line' linked from our Blu-ray Release Schedule, where it is indexed under February 7. 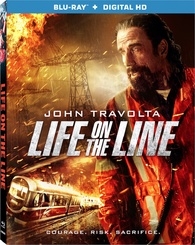