The thriller starring Daniel Radcliffe and Toni Collette is headed for Blu-ray in November.

In an early announcement to retailers, Lionsgate is working on 'Imperium' for Blu-ray on November 1.

Inspired by real events. When extremists steal devastatingly toxic materials in order to build a dirty bomb, FBI Agent Nate Foster (Daniel Radcliffe, Harry Potter franchise), with help from Agent Zamparo (Toni Collette, The Sixth Sense), goes undercover in order to infiltrate their shadowy underworld. But can Nate find the group's leader — and the bomb — before his cover is blown?

You can find the latest specs for 'Imperium' linked from our Blu-ray Release Schedule, where it is indexed under November 1. 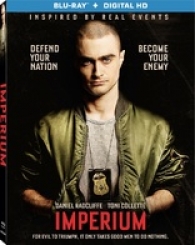