The infamous Dr. Lecter will take a bite out of Blu-ray in October.

In an early announcement to retailers, Lionsgate is preparing 'Hannibal: The Complete Series' for Blu-ray on October 11.

FBI Agent Will Graham (Hugh Dancy) hunts the most notorious serial killers. Graham is both gifted and cursed with an extraordinary ability: he can think like his prey, seeing what they see and feeling what they feel. While pursuing an especially troubling, cannibalistic murderer, Special Agent Jack Crawford (Laurence Fishburne) teams Graham with a highly respected psychiatrist - a man with a taste for the criminally minded: Dr. Hannibal Lecter (Mads Mikkelsen). Savor every last moment of Bryan Fuller's beautifully acclaimed thriller with seasons one through three in Hannibal: The Complete Series.

The Blu-ray will feature 1080p video, a DTS-HD MA 5.1 soundtrack, and supplements will include: Audio commentaries on select episodes; Deleted scenes; Gag reel; Storyboards; Featurettes; Feature-length documentary on the making of episode 205; Cast and crew reflections on Season 2; and Webisodes.
Suggested list price for the Blu-ray is $39.97.

You can find the latest specs for 'Hannibal: The Complete Series' linked from our Blu-ray Release Schedule, where it's indexed under October 11. 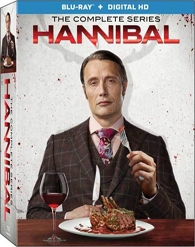 Discs mentioned in this article: (Click for specs and reviews)
Hannibal: The Complete Series (Blu-ray)