The first season of the AMC series will arrive on Blu-ray in October.

In an early announcement to retailers, Lionsgate is preparing 'Feed the Beast: Season One' for Blu-ray on October 11.

Tommy (David Schwimmer) and Dion (Jim Sturgess) are like brothers. With all the love - and all the complications - that comes with it. Dion can't stay out of trouble. Tommy can't move past it. For two friends on the brink of losing everything, a dusty pipe dream of opening an upscale restaurant in their hometown of the Bronx is all they have left to turn their lives around.

The Blu-ray will feature 1080p video, a DTS-HD MA 5.1 soundtrack, and supplements, will include: "Fate, Friendship and Food: Crafting Season 1" Featurette; "The Food Behind The Fancy" Featurette; "Building The Beast" Featurette; and Audio Commentary with Cast & Crew on Select Episodes.

You can find the latest specs for 'Feed the Beast: Season One' linked from our Blu-ray Release Schedule, where it's indexed under October 11. 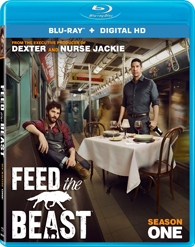 Discs mentioned in this article: (Click for specs and reviews)
Feed the Beast: Season One (Blu-ray)