Emma Roberts and Dave Franco Strike a 'Nerve' on Blu-ray

The 2016 thriller will be available in stores in October.

In an early announcement to retailers, Lionsgate says 'Nerve' will hit Blu-ray on October 25.

Industrious high school senior Vee (Emma Roberts) is tired of living life on the sidelines. Pressured by friends to join the popular online game Nerve, Vee teams up with a sly and charming competitor (Dave Franco) for just one dare in what seems like harmless fun. But as Vee is caught up in the thrill of the adrenaline-fueled competition, the game takes a sinister turn with increasingly dangerous acts, leading Vee into a high-stakes finale that will determine her entire future.

The combo pack will feature 1080p video, a DTS:X soundtrack, and supplements include: Watcher Mode ("Creating Nerve" - 15 Character Pods; "The Fat Jewish Gets Tattewish" Outtakes; and "The Governor's Ball Takeover" – Social Media Stars in a Game of Dare) and Player Mode ("Do You Have the Nerve?" Game; "Are You a Watcher or a Player?" Quiz; and Player Profiles).

You can find the latest specs for 'Nerve' linked from our Blu-ray Release Schedule, where it is indexed under October 25. 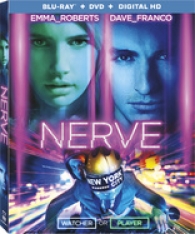