The musical starring Emma Stone and Ryan Gosling is dancing toward Blu-ray and Ultra HD Blu-ray in April.

As previously reported, Lionsgate is preparing 'La La Land' for Blu-ray and Ultra HD Blu-ray, and the release date has now been announced as April 25.

Written and directed by Academy Award (R) nominee Damien Chazelle, LA LA LAND tells the story of Mia [Emma Stone], an aspiring actress, and Sebastian [Ryan Gosling], a dedicated jazz musician, who are struggling to make ends meet in a city known for crushing hopes and breaking hearts. Set in modern day Los Angeles, this original musical about everyday life explores the joy and pain of pursuing your dreams.

The Ultra HD Blu-ray and Blu-ray will both feature Dolby Atmos soundtracks, and supplements will include: 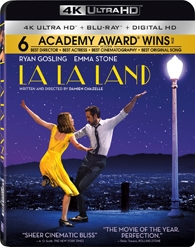