The 1987 Vestron Video black comedy is bound for Blu-ray in September.

In an early announcement to retailers, Lionsgate will be releasing 'Blood Diner' on Blu-ray on September 27.

Specs have yet to be revealed, but the Blu-ray will be newly remastered in high-definition from the original film elements and supplements include: Audio Commentary with Director Jackie Kong; Queen Kong; The Cook, The Uncle, and The Detective; Open for Business; Scoring for Sheetar!; You Are What They Eat; Archival Interview with Project Consultant Eric Caidin; Theatrical Trailer & TV Spots; and Still Gallery.

You can find the latest specs for 'Blood Diner' linked from our Blu-ray Release Schedule, where it is indexed under September 27. 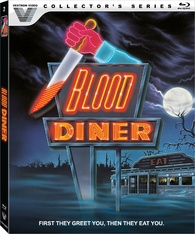