Lionsgate has revealed A Simple Favor will be available on 4K Ultra HD Blu-ray and Blu-ray on December 18.

A Simple Favor centers around Stephanie (Kendrick), a mommy vlogger who seeks to uncover the truth behind her best friend Emily's (Lively) sudden disappearance from their small town. Stephanie is joined by Emily's husband Sean (Golding) in this stylish thriller filled with twists and betrayals, secrets and revelations, love and loyalty, and murder and revenge.

The 4K release will feature Dolby Vision HDR, a Dolby TrueHD 7.1 soundtrack, and supplements will include:

3 Audio Commentaries with Cast and Crew

You can find the latest specs for A Simple Favor linked from our 4K and Blu-ray Release Schedules, where it is indexed under December 18. 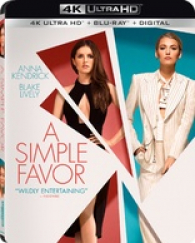 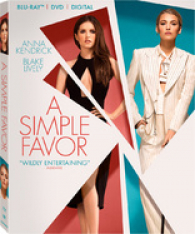