Crestron has announced an update for its Pyng Luxury Home Automation platform. As part of the enhancement, the system will now offer IP control support for 3rd party A/V devices, starting with LG's 2017 and 2018 OLED, SUPER UHD, and UHD TV models.

"We are very pleased to work with Crestron to broaden our relationship to include IP control of our consumer LG TVs including our category-leading LG OLED, LG SUPER UHD and LG UHD TVs," said David Park, Sr. Product Marketing Manager for LG. "With the rapid growth of AI, the TV has become an increasingly more important player in whole-home solutions. LG TVs deliver the ultimate combination of world-class picture quality and access to the world's leading AI platforms. The addition of the Crestron Pyng Residential platform further builds on value of an LG TV in the connected home environment." 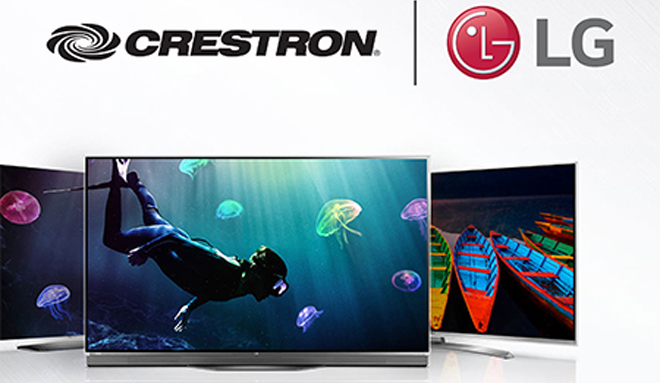 The Crestron Pyng platform offers simple luxury home automation set up and control for a variety of components, including audio, lighting, shades, thermostats, door locks, security keypads, occupancy sensors, photosensors, and more. Technology integrators can use the tech to easily develop lifestyle scenes for each room in a user's home, schedule events, and more directly through an iPad. Likewise, homeowners can then easily make changes to scenes, settings, and system schedules. And now control for LG 2017 and 2018 displays will be supported as part of the Crestron Pyng ecosystem as well.

"Choosing LG as a launch partner for this enhancement was a no-brainer," said Bob Bavolacco, Partnerships Manager for Crestron. "LG and Crestron have partnered to provide IP control of their displays for several years with great success in the Enterprise market, and when we were looking to extend that into the residential market, the decision to launch with LG was immediate."

Pyng video compatibility for LG displays is set to launch this summer.

A new study conducted in collaboration with HEC Montreal's Tech3Lab has revealed the benefits of D-BOX motion for VR experiences. According to the research, the tech has been named a main factor in significantly reducing motion dizziness during virtual reality.

"Not only does the motion contribute to reducing the dizziness that's common with virtual reality, but we definitely noticed that it also enhances the effect of the immersive experience for users," said Pierre-Majorique Léger, Chairholder of the NSERC-PROMPT industrial research chair in user experience and Co-director of Tech3Lab.

During traditional VR experiences, a certain level of discomfort can occur due to a disconnect between what a user's physical body is doing and what a user's brain thinks it is doing. Per the Tech3Lab study, however, when high definition and precise motion are added to the VR experience, it can help "trick" the brain into believing that the experience is really happening, resulting in a reduction or elimination of motion sickness.

"As great and promising as VR is, we can now say with all certainty the effect content providers and game developers are trying to capture is incomplete without motion," said Claude Mc Master, President and CEO of D-BOX. "As the study conclusively shows, it's the one element that not only reduces or eliminates the uncomfortable side effects that users have complained about, but it pushes virtual reality into a totally immersive, incredibly believable experience."

D-BOX motion tech is currently being implemented into a variety of VR experiences from companies like Fox, Alcon Entertainment, Sony Pictures, Ubisoft, VRC, and Dark Corners

Audio Research has announced its latest audio component. The new Reference 160M (REF160M) Monoblock Power Amplifier is the result of two years of development, and is set to launch in Natural (Silver) and Black finishes for $30,000/pair.

And beyond choices for the size of the bezel, the Medium and Large versions also feature twelve designer-selected border color options with an in-lay of hand-wrapped velvet or completely wrapped in velvet. In addition, Zero Edge Pro is available with the company's LED backlighting options as well, including a new IP controlled solution that can be integrated and controlled with Philips Hue Smart Lighting ecosystems.

Meanwhile, Screen Innovations has also announced a new XL version of its Black Diamond optical-layer based Ambient Light Rejecting (ALR) material exclusively for Zero Edge Pro. In addition, the screen is also available in several other materials, including a new 1.0 gain material dubbed Unity, and acoustically transparent materials like Pure and Slate AT.