"I've long argued that streaming offers immediacy and convenience, but the Internet can't deliver a reliable high-bitrate content stream, such as 4K, unless it is heavily compressed," said industry analyst Dan Rayburn, Principal Analyst at Frost & Sullivan. "Kaleidescape's model of downloading and playing back from a local hard drive is the only way to get Internet-delivered content to match a 4K disc experience. Many of the service providers touting 4K content are capping their streaming bitrates at 16 Mbps. So, naturally, Strato's local playback—with bitrates up to 100 Mbps—will deliver better picture and sound quality," he added.

The Strato Movie Player allows customers to download Ultra HD movies from the company's movie store with playback quality that matches or surpasses that of commercial theaters. In addition, the player supports lossless multichannel audio, and HDR content on displays that can process open standard 10-bit HDMI 2.0a HDR. The device is available with or without an internal 6TB hard drive that can store up to 100 4K Ultra HD movies, 150 Blu-ray quality movies, or 900 DVD quality movies. 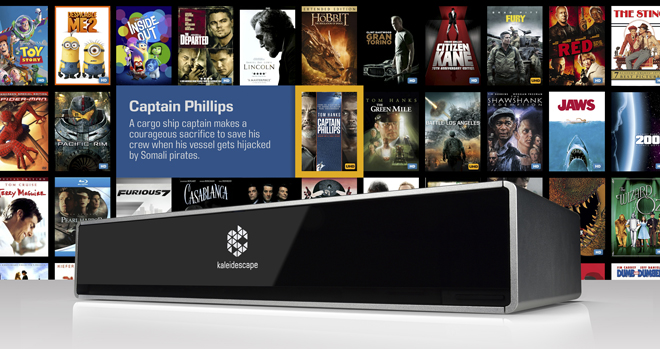 The Kaleidescape Movie Store currently offers 11,000 movies and 1,500 television seasons, including over 100 Ultra HD titles. In addition, the company just announced a new deal to offer Sony films in Ultra HD. Sony titles will be priced at around $30 and buyers of the Strato Movie Player will receive five downloadable Sony movies. Kaleidescape users can also upgrade their previously purchased UltraViolet SD and HD Sony Pictures titles to the 4K Ultra HD format. Finally, HDR films will be added as they become available.

Kaleidescape's Strato Movie Player will be available in Q1 2016 for a suggested retail price of $4,495 with an internal 6 TB hard drive, and $3,495 with no internal hard drive.