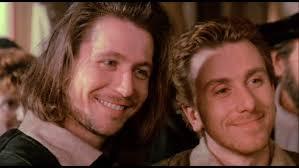 The 1990 film starring Gary Oldman, Tim Roth, Richard Dreyfuss, and Iain Glen will arrive on Blu-ray in the new year. Pre-orders are now available at Amazon.

In an early announcement to retailers, Image Entertainment will be releasing 'Rosencrantz & Guildenstern Are Dead' on Blu-ray on January 12.

Winner of the prestigious Venice Film Festival's Golden Lion (Best Picture), Rosencrantz & Guildenstern Are Dead is based on Tom Stoppard's award-winning play. It's the inventive tale of Hamlet as told from the viewpoint of two of the work's supporting, but certainly more outrageous characters. In this cleverly inspired version, however, the Shakespearean equivalents of Laurel and Hardy get a chance to take the lead roles in a dazzling setting where illusion and reality overlap!

You can find the latest specs for 'Rosencrantz & Guildenstern Are Dead' linked from our Blu-ray Release Schedule, where it is indexed under January 12.