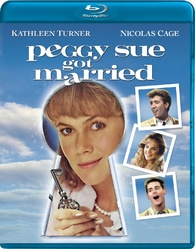 Francis Ford Coppola's 1986 romantic comedy will walk down the Blu-ray aisle at the end of the month!

In an early announcement to retailers, Image Entertainment will be releasing 'Peggy Sue Got Married' on Blu-ray on July 30.

If you could live your life all over again, would you change anything? Kathleen Turner ('Serial Mom'), portraying Peggy Sue, gets the chance to answer this tantalizing question in Francis Ford Coppola's ('The Godfather') acclaimed romantic comedy. Co-starring Joan Allen ('Face/Off'), Nicolas Cage ('Raising Arizona'), Helen Hunt ('As Good As It Gets'), and Jim Carrey ('Bruce Almighty'), Peggy Sue Got Married is a humorous, heartfelt fantasy about the golden opportunity almost everyone has longed for at least once.

The Blu-ray will feature 1080p video, a DTS-HD Master Audio 5.1 soundtrack, and supplements have yet to be revealed.

You can find the latest specs for 'Peggy Sue Got Married' linked from our Blu-ray Release Schedule, where it's indexed under July 30.

Discs mentioned in this article: (Click for specs and reviews)
Peggy Sue Got Married (Blu-ray)