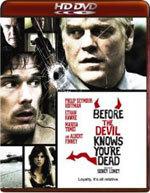 'Before the Devil Knows You're Dead' Heads to HD DVD (UPDATE: Blu-ray Too!)

Image Entertainment is planning an April high-def release for the acclaimed Sidney Lumet crime thriller 'Before the Devil Knows You're Dead.'

Starring Ethan Hawke and Philip Seymour Hoffman as brothers who get entangled in a plot to rob their parents jewelry store, 'Before the Devil Knows You're Dead' has been hailed as a return to form for Lumet, and is generating early Oscar buzz.

Image has now revealed plans to bring the thriller to HD DVD and Blu-ray on April 15, day-and-date with the standard-def DVD. Both high-def editions are expected to retail at a suggested $35.98 list price.

There were no tech specs or supplemental details available at press time, but a full announcement is expected in the coming weeks.

In the meantime, you'll find preliminary disc details for 'Before the Devil Knows You're Dead' linked from our HD DVD Release Schedule and our Blu-ray release schedule, where it's indexed under April 15, 2008.

Discs mentioned in this article: (Click for specs and reviews)
Hannah Montana And Miley Cyrus: Best Of Both Worlds Concert Tour (Blu-ray)
Before the Devil Knows You're Dead (Blu-ray)