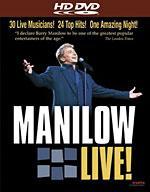 He may write the songs, but the whole world won't be singing them just yet -- at least in high-def -- as Image Entertainment has delayed next week's HD DVD release of 'Barry Manilow Live!'.

Originally set to debut on November 14, Image has set a new date of December 12 for the beloved crooner's high-def debut.

Image has given no reason for the delay, but there are no changes expected to the disc's technical specs and supplemental features, which are scheduled to include a commentary by Manilow.

List price for the release also remains the same at $24.95.

We've added the date change for 'Manilow Live!' to our HD DVD Release Schedule, and we hope to have a full review for you when the disc finally arrives.