The horror film has been slated to arrive on both formats this September.

In an early announcement to retailers, Image Entertainment says 'Puppet Master: The Littlest Reich' will be available on Blu-ray and 4K Ultra HD Blu-ray on September 25.

Edgar is recently divorced and returns to his childhood home to where he finds a nefarious looking puppet in his deceased brother’s room. He decides to sell the doll for some quick cash at a small-town convention celebrating the 30th Anniversary of the infamous Toulon Murders. All hell breaks loose when a strange force animates the puppets at the convention, setting them on a bloody killing spree that’s motivated by an evil as old as time. Starring Thomas Lennon, Jenny Pellicer, Udo Kier, Barbara Crampton and Michael Pare, Puppet Master: The Littlest Reich “brings puppet carnage and mayhem to insane new heights” (Bloody-Disgusting).

You can find the latest specs for Puppet Master: The Littlest Reich linked from our Blu-ray and 4K Release Schedules, where it is indexed under September 25. 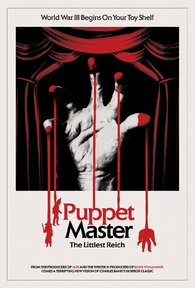 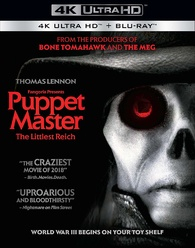