When it comes to Ultra HD TVs, there really is no such thing as "too big." After all, nothing shows off all those glorious pixels like a gigantic screen. Sadly, large displays also usually mean even larger price tags. But does a mammoth-sized TV always require an equally mammoth-sized wallet?

Not if Hisense has anything to say about it. With their new lineup of large-screen Ultra HD TVs, the company is attempting to bring affordable luxury to the 4K display market. And at their launch event in New York City last week, we were able to get a little one-on-one time with each of the new sets.

Offering sizes ranging form 65-inches to 86-inches, the LCD lineup starts at just $1,000 and caps off at $6,000, providing a wide range of price points suitable for a variety of budgets. And if you're looking for something a little more ambitious, the company even has a 100-inch 4K Laser TV in the works.

All of the new LCD displays include smart TV capabilities, UHD upscaling, dbx-TV audio, and HDR10 processing -- though only the flagship H10 model meets the UHD Premium spec for HDR, and only the Laser TV includes 3D support. For demo purposes, the company played back native Ultra HD footage from USB thumb drives. With that said, all of the content was presented in SDR and standard color gamuts only. Likewise, the lighting conditions were not particularly ideal for evaluating picture quality. Still, even with those caveats, the event offered a solid look at what customers can come to expect from these new models when they hit stores later this year and early next year.

So, without further ado, here's a rundown of Hisense's upcoming big-screen lineup along with our impressions! 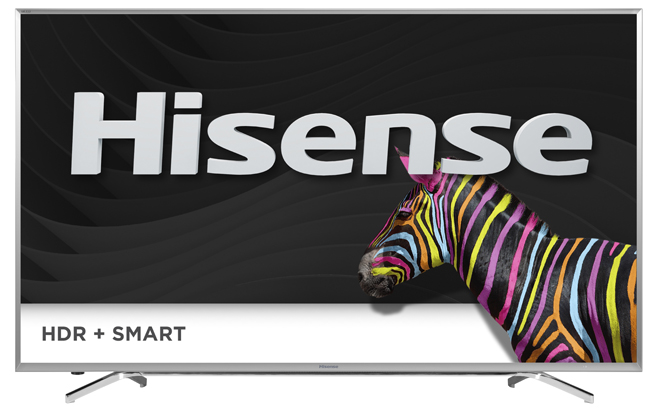 Serving as the company's new flagship ULED Ultra HD TV model, the 70-inch H10 series display has all the bells and whistles that customers have come to expect from a premium large-screen 4K TV. With that in mind, the 70H10D is the only new Hisense model to use quantum dot technology, offering HDR10 processing with an output of 1,000 nits, along with wide color gamut support for 99% of the P3 color space and about 91% of the Rec 2020 color space (according to Hisense reps at the event). Likewise, the display uses a ULED panel with full array local dimming marked by an impressive 320 zones.

In addition, the set is in the process of receiving THX certification, and already has the distinction of being the only new Hisense model to include UHD Premium certification -- placing the display firmly in the high-end tier of current Ultra HD TV offerings. In fact, the only notable high-end features missing here are 3D support and Dolby Vision (though Hisense is looking into including that latter feature in next year's model). 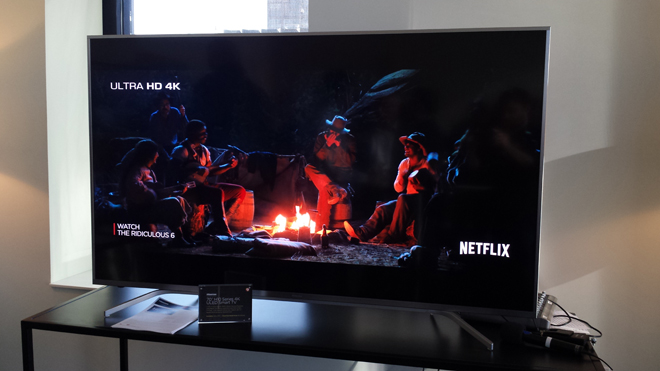 Living up to its on-paper specs, the TV looked rather beautiful in person, displaying a demo package of various Ultra HD Netflix clips -- including footage from 'The Ridiculous 6,' and Marvel's 'Daredevil' and 'Jessica Jones' -- along with a requisite reel of stunning vistas. Unfortunately, like all of the demo material being displayed, the footage was not presented in HDR or wide colors, but, even without pushing these premium features, the picture quality was quite good resulting in pleasing saturation, contrast, and black levels in the viewing environment.

The 70H10D is set to launch early next year for a suggested retail price of $3,500, putting it in direct competition with other more expensive premium large-screen offerings with similar specs from companies like Sony, Samsung, LG, and VIZIO.

If 70-inches just isn’t big enough for you, don't worry, there's also Hisense's new 4K Laser TV. Not a traditional television at all, this display is actually comprised of an Ultra HD short-throw projector and a 16:9 100-inch screen, giving customers a giant wall-sized image. The projector offers 2800 lumens of brightness, HDR10 processing with an output of about 300 nits, and support for around 20,000 hours of use. With that said, though the display covers the Rec. 709 color space it does not support wide color gamuts. On the plus-side, however, unlike the company's LCD displays, the 4K Laser TV does support 3D playback and comes with two 3D glasses. Likewise, the TV also includes a full 5.1 speaker system. Finally, Hisense is also hoping to have the display THX certified before its release. 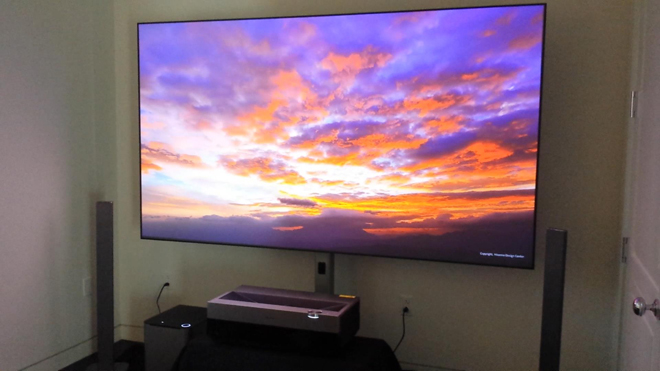 For demo purposes, Hisense had the 100-inch 4K Laser TV set up in its own room where the display took up most of the back wall. With the projector about 13-inches from the screen, the TV played back various clips of hillsides, flowers, and busy cities. While a lot of this material looked fantastic on the massive screen, a few of the clips did exhibit some notable artifacts, including aliasing. Thankfully, these quirks seemed to be inherent to the source and not the projector itself. Again, it should be noted that the material was not presented in HDR and though the window was covered to some extent, there was still a fair amount of ambient light in the room, making it hard to fully judge the picture quality. 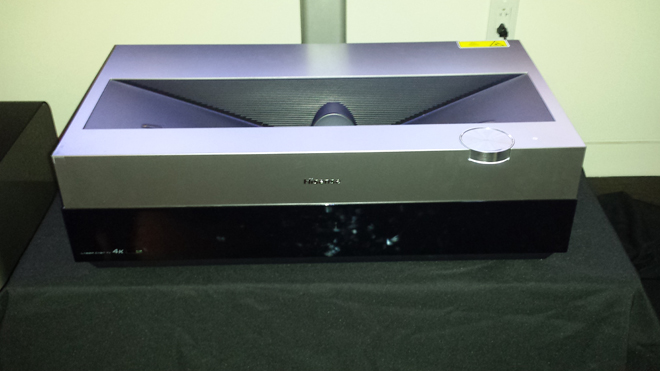 The H9900 Series 4K Laser TV will be available in summer 2017 for around $12,999. And while that's still a pretty hefty price tag, it's quite competitive when placed against similar sized LCD TVs from other brands. Based on my limited time with the display, I came away impressed by the scope of the image, but I do wish the TV offered expanded colors. Thankfully, this is something that Hisense plans to incorporate in the second generation model which could also expand to an even larger 140-inches.

Also boasting the patented ULED tech found in the H10 series, is the new 65-inch H9 series Ultra HD TV. The 65H9D offers HDR10 processing with an output of about 400 nits, allowing the TV to render high dynamic range content from USB and HDMI sources to the best of its ability. In addition, the display uses an edge-lit ULED panel with local dimming (the exact number of zones has not been detailed). Likewise, the TV includes wide color gamut support, providing about 90% of the P3 color space and around 82% of the Rec 2020 space (according to Hisense reps at the event). 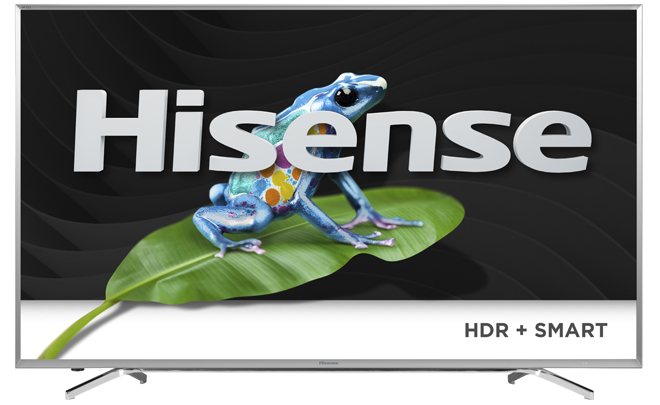 In person, the display looked quite good, offering a pleasing demo reel of cities, mountains, and other breathtaking nature imagery -- even if the material was only in SDR with standard colors.

The 65H9D will be available early next year for a suggested retail price of $1,700.

Again, the TVs all featured various demo clips with cityscapes and nature footage, offering some rather beautiful imagery (minus a few source related artifacts). In addition, the 75-inch model was demoed with an Xbox One racing game being played in Ultra HD, highlighting the TVs picture quality and fast response time. 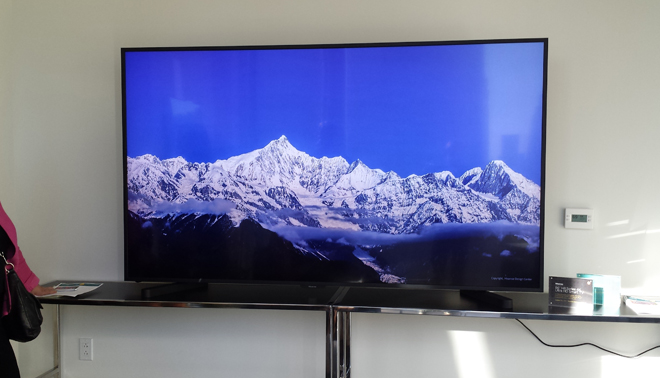 Like the company's higher-end models, all of the H8 series TVs offer HDR10 processing with outputs ranging from around 300-400 nits, allowing each display to scale HDR content to the best of their abilities. But while each set in the series offers a similar array of features, there are some notable differences in specs between them. Here's a breakdown of key attributes for each model.

65H8C - The 65-inch H8 series display boasts an edge-lit LED LCD panel with no local dimming capabilities. With that said, the display does offer wide color gamut support for more than 83% of the P3 color spectrum.

75H8C - The 75-inch H8 series Ultra HD TV uses an edge-lit LED LCD panel with local dimming (about 16 zones according to the Hisense rep at the event). Likewise, the display includes wide color gamut support for more than 83% of the P3 color spectrum.

86H8D - According to the press release, the 86-inch H8 series Ultra HD TV features a full-array LED LCD panel with local dimming -- but during the event I was told the display uses an edge-lit panel with about 24 zones. I've contacted Hisense about the discrepancy and I'll update this section once I hear back. Unfortunately, the display does not offer wide color gamut support.

A full evaluation will have to wait until we get some more hands-on time with these units, but Hisense's big-screen future certainly looks promising. For now, though, what do you think about the company's new Ultra HD lineup? Let us know your thoughts in the forums! 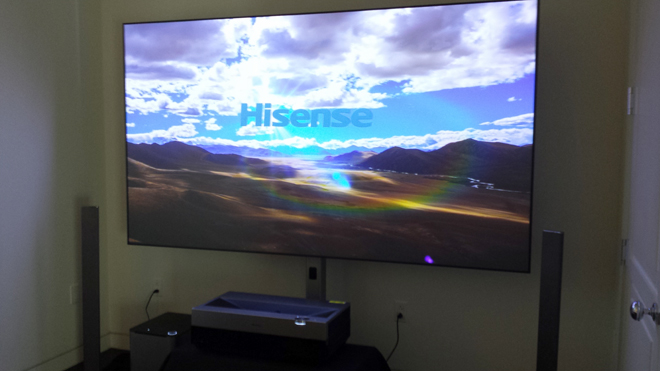