The company's latest VR headset is now available for pre-order.

HTC has announced the launch of its new VIVE Pro VR Head Mounted Display. Pre-orders are now available for an MSRP of $799 and shipments are set to begin on April 5. And beyond the new VIVE Pro, HTC has also announced a $100 price cut for the previously released standard VIVE VR headset bundle, bringing the cost down to $499.

"With the Vive Pro we are delivering the best quality display and visual experience to the most discerning VR enthusiasts. Our goal has always been to offer the most premium VR platform available and to drive adoption for VR," said Daniel O'Brien, HTC Vive General Manager, US. "By lowering the price of the current Vive, we are making VR more accessible while expanding the potential market for developers. Whether you're a VR enthusiast or new to the platform, there's never been a better time to join the most complete VR platform available."

The VIVE Pro uses dual-OLED displays with a combined image resolution of 2880 x 1600 and 615 PPI. In addition, the unit also includes integrated, high impedance headphones powered by a built-in amplifier with 3D spatial sound and dual microphones for active noise cancellation. Likewise, the headset has been designed with comfort in mind, offering a more even weight distribution and simple adjustment buttons for users who wear glasses.  SteamVR Tracking 1.0 and 2.0 are supported as well, enabling 360-degree, floor to ceiling movement coverage when seated, standing, or in a space up to 20' x 20' with base stations (sold separately). 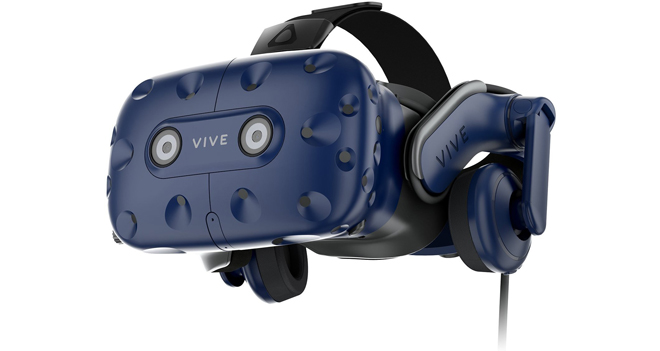 Here's a full rundown of specs per HTC: