Winter is coming to 4K Blu-ray in June.

In an early announcement to retailers, HBO is prepping Game of Thrones: The Complete First Season for 4K Ultra HD Blu-ray on June 5.

In a land where summers span decades and winters can last a lifetime, trouble is brewing. From the scheming south and the savage eastern lands, to the frozen north and the ancient Wall that protects the realm from the darkness beyond, powerful families are engaged in a deadly cat-and-mouse game for control of the Seven Kingdoms of Westeros. As betrayal, lust, intrigue and supernatural forces shake the four corners of the Kingdoms, their bloody struggle for the Iron Throne will have unforeseen and far-reaching consequences. Winter is coming. Let the Game of Thrones begin. 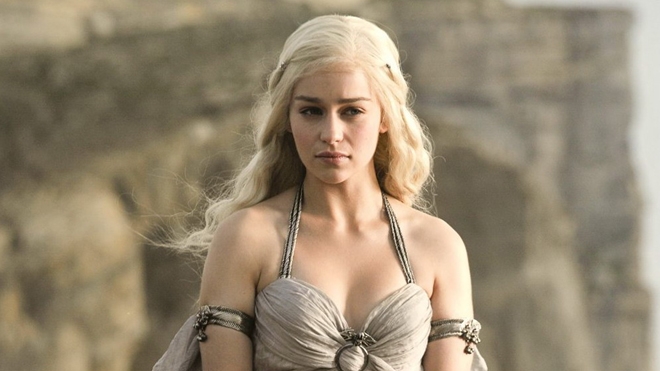 The Ultra HD Blu-ray will feature 2160p video with Dolby Vision and HDR10, along with a Dolby Atmos soundtrack. Access to a Digital HD copy (not 4K) of the season will also be offered, and supplements (all in HD) will include:

- Animated Histories: Learn about the mythology of Westeros as told from the varying perspectives of the characters themselves.
- Anatomy of an Episode - an in-episode experience that explores the creative minds and colossal efforts behind episode six, "A Golden Crown."
- Cast Auditions: Watch rarely-seen footage of the cast auditioning for Game of Thrones
- Making Game of Thrones -an exclusive 30-minute feature including never-before-seen footage from the set and interviews from the cast and crew.
- Character Profiles - profiles of 15 major characters as described by the actors portraying them.
- Creating the Show Open - an inside look at the creation of the Emmy-winning opening title sequence for Game of Thrones.
- From the Book to the Screen - executive producers David Benioff and D.B. Weiss along with author George R.R. Martin talk about the challenges of bringing Martin's epic fantasy novel to life on HBO.
- The Night's Watch - an in-depth look at the unique order of men who patrol and protect the Wall, a 700 foot ice structure that separates the Seven Kingdoms from the darkness beyond.
- Creating the Dothraki Language - an insightful glance into the comprehensive language created for the Dothraki people in Game of Thrones.
- Audio Commentaries - Seven audio commentaries with cast and crew including David Benioff, D.B. Weiss, George R.R. Martin, Emilia Clarke, Peter Dinklage, Kit Harington, Lena Headey, Mark Addy, Nikolaj Coster-Waldau, Maisie Williams, Sophie Turner, Isaac Hempstead Wright, Bryan Cogman, Harry Lloyd, Daniel Minahan and Alan Taylor.

You can find the latest specs for Game of Thrones: The Complete First Season linked from our 4K Release Schedule, where it is indexed under June 5. 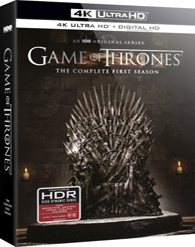