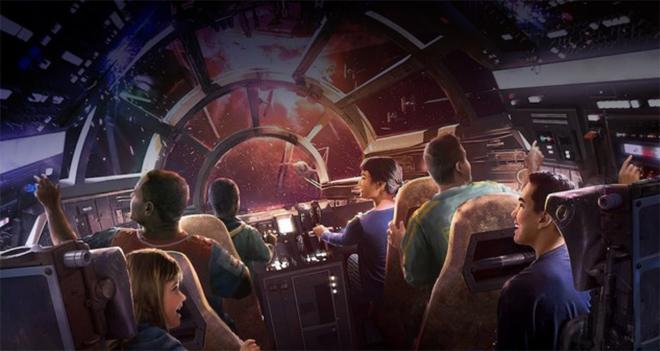 Disney has announced opening dates for Star Wars: Galaxy’s Edge. The new theme park land will open ahead of schedule at Disneyland in California on May 31 and at Disney's Hollywood Studios (part of Disney World) in Florida on August 29.

Star Wars: Galaxy's Edge will allow visitors to "become galactic travelers and live their own Star Wars stories in a galaxy far, far away." Visitors will be able to explore the planet Batuu, stop by a street market in Black Spire Outpost, try franchise delicacies like blue milk, visit the Cantina, and more -- all while interacting with various creatures and characters from the Star Wars universe.

And as part of the land's phase one opening, guests will also be able to experience the Millennium Falcon: Smugglers Run ride, placing them behind the controls of the famed ship that "made the Kessel Run in less than twelve parsecs."

Check out a new promo video below!

Following the park's initial launch, a phase two expansion for Galaxy's Edge is also planned to open later in the year, adding access to the Star Wars: Rise of the Resistance ride. The attraction is designed to thrust guests into an epic battle between the Resistance and the First Order, and is said to "blur the lines between fantasy and reality."

In order to gain admittance to Star Wars: Galaxy's Edge at Disneyland in California between May 31 and June 23, 2019, guests will need valid theme park tickets and a no-cost reservation (subject to availability). Details on how to make a reservation will be revealed at a later date via Disneyland.com and the Disney Parks Blog. Meanwhile, reservations will not be offered or required to visit Star Wars: Galaxy’s Edge at Walt Disney World in Florida at this time.