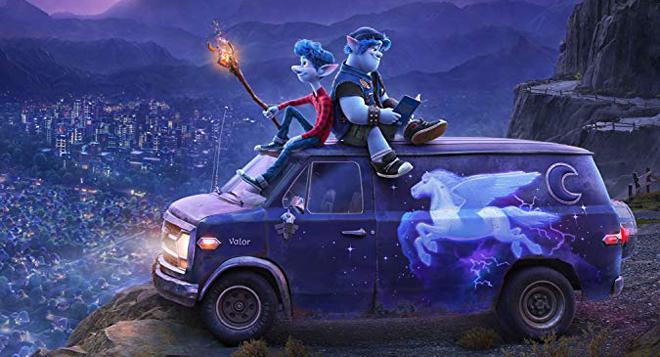 Pixar's new animated adventure is heading to theaters in March.

Following an initial teaser, Disney and Pixar have released the first full trailer for Onward. The studios' latest animated film is set to premiere on March 6, 2020.

Set in a suburban fantasy world, Disney and Pixar's Onward introduces two teenage elf brothers who embark on an extraordinary quest to discover if there is still a little magic left out there in order to spend one last day with their father, who died when they were too young to remember him. Pixar Animation Studios' all-new original feature film is directed by Dan Scanlon and produced by Kori Rae—the team behind Monsters University.

Onward stars the vocal talents of Tom Holland, Chris Pratt, Octavia Spencer, Julia Louis-Dreyfus, and John Ratzenberger. In addition to directing, Dan Scanlon also serves as the film's screenwriter. Meanwhile, Pete Docter is on board as an executive producer.

Following the release of Onward, Pixar's upcoming film lineup also includes Soul from director Pete Docter. The movie will focus on a "journey from the streets of New York City to the cosmic realms, discovering the answers to life's most important questions." Soul stars Ahmir Questlove Thompson, Phylicia Rashad, Daveed Diggs, Tina Fey, and Jamie Foxx. In addition, Jon Batiste will be composing original jazz music for the movie. The movie is scheduled for release on June 19, 2020.

Likewise, Disney and Pixar are also prepping a new series set in the Monsters, Inc. franchise, called Monsters at Work, for the upcoming Disney+ streaming service. The show will feature the return of stars Billy Crystal and John Goodman as Mike and Sulley respectively. Other returning cast members from previous entries in the franchise will include John Ratzenberger as Yeti, Jennifer Tilly as Celia, and Bob Peterson as Roz. In addition, the show will also be home to new characters voiced by Ben Feldman, Kelly Marie Tran, Henry Winkler, Aisha Tyler, Lucas Neff, Alanna Ubach, and Stephen Stanton. Monsters at Work is set to premiere sometime in 2020.