The 4K release of the 2014 film starring Angelina Jolie is coming to 4K this September.

Explore the untold story of Disney's most iconic villain in this wickedly fun twist on the classic SLEEPING BEAUTY -- now even more spectacular in 4K Ultra HD.Journey beyond the fairy tale in this soaring adventure that is "visually arresting, brilliantly designed" (Andrew Barker, Variety).

You can find the latest specs for Maleficent - 4K Ultra HD Blu-ray linked from our 4K Blu-ray Release Schedule, where it is indexed under September 24. 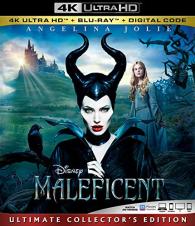