The time-traveling adventure from acclaimed director Ava DuVernay will be available in stores this summer.

In an early announcement to retailers, Disney says 'A Wrinkle in Time' will be available on Blu-ray and 4K Ultra HD Blu-ray on June 5.

As fantastical as the film’s premise and imagery may seem, “A Wrinkle in Time” centers on a universal human need that feels particularly relevant and relatable today. “This is a story about belonging,” says DuVernay. “It’s about a girl who just doesn’t feel strong in her mind, body and spirit. But through this epic journey, she finds her strength and learns that the center of the universe starts inside her. It’s about Meg feeling like she belongs in the universe and has a mighty part to play… as do we all.”

Each release will feature a lossless 7.1 soundtrack (Dolby Atmos on the 4K UHD) and supplements include: A Journey Through Time – Take an up-close look at the making of this magnificent movie with Director Ava DuVernay, Oprah Winfrey, and the cast and crew; Deleted Scenes (with optional director audio commentary); Audio Commentary; Bloopers; and Original Songs/Music Videos.

You can find the latest specs for A Wrinkle in Time linked from our Blu-ray and 4K Release Schedules, where it is indexed under June 5. 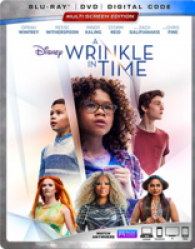 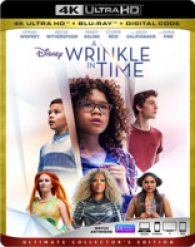