The Men in Black are heading to 4K just in time for the first film's 20th Anniversary.

Men in Black - Follows the exploits of agents Kay (Tommy Lee Jones) and Jay (Will Smith), members of a top-secret organization established to monitor alien activity on Earth. The two MiB find themselves in the middle of the deadly plot by an intergalactic terrorist (Vincent D'Onofrio) who has arrived on Earth to assassinate two ambassadors from opposing galaxies.

Men in Black II - Agent J and Agent K are back! Agent J needs help with a new breed of alien terror intent on destroying the planet. He is sent to find Agent K, restore his memory and enlist him in the fight of a lifetime.

Men in Black III - Agents J and K are back... in time. J has seen some inexplicable things in his 15 years with the Men in Black, but nothing, not even aliens, perplexes him as much as his wry, reticent partner. But when K's life and the fate of the planet are put at stake, Agent J will have to travel back in time to put things right. J discovers that there are secrets to the universe that K never told him - secrets that will reveal themselves as he teams up with the young Agent K (Josh Brolin) to save his partner, the agency, and the future of humankind.

The 4K Ultra HD Blu-ray set will feature 2160p video with HDR and a Dolby Atmos soundtrack on each film. Supplements will likely mirror those found on the previously released Blu-ray editions.

You can find the latest specs for the Men in Black Trilogy linked from our Ultra HD Blu-ray Release Schedule, where it is indexed under December 5. 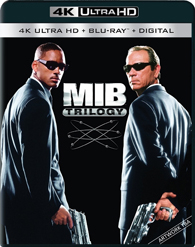