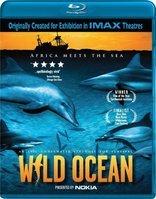 IMAX's "epic underwater struggle for survival" is slated for a Blu-ray release in January.

Image Entertainment will take the plunge into the 'Wild Ocean' on Blu-ray on January 26.

Specs and supplements have yet to be revealed, but suggested list price for the Blu-ray has been set at $24.98.

You can find the latest specs for 'Wild Ocean' linked from our Blu-ray Release Schedule, where it's indexed under January 26.

Discs mentioned in this article: (Click for specs and reviews)
Wild Ocean (Blu-ray)