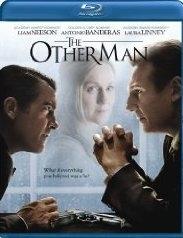 'The Other Man' Slated for Blu-ray

Another marriage hits a major speed bump in high-definition this winter.

Image Entertainment says 'The Other Man' is coming to the high-definition format on December 15.

The film stars Liam Neeson as a husband who suspects that his wife (Laura Linney) is having an affair and tracks down the other man (Antonio Banderas).

The Blu-ray will feature 1080p video, likely a lossless soundtrack (still unconfirmed), and supplements including an audio commentary, interviews, and a trailer.

Suggested list price for the Blu-ray has been set at $35.98.

You can find the latest specs for 'The Other Man' linked from our Blu-ray Release Schedule, where it's indexed under December 15.

Discs mentioned in this article: (Click for specs and reviews)
The Other Man (Blu-ray)