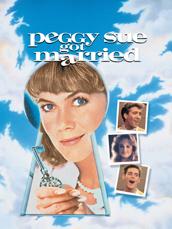 In an early announcement to retailers, Image Entertainment is preparing 'Peggy Sue Got Married' for Blu-ray on July 30.

Peggy Sue (Kathleen Turner) and Crazy Charlie (Nicolas Cage) have been suffering many difficulties in their marriage, and are now on the verge of divorce. Wishing to forget her troubles, Peggy goes to her 25th High School Reunion and is voted Reunion Queen. But then something very strange happens: Peggy passes out and travels back in time to revisit the years of her youth. She now has the chance to rewrite history, but is unsure whether she should avoid marriage to Charlie this time around or simply allow fate to take its course.

Specs and supplements have yet to be revealed, but suggested list price for the Blu-ray is $17.97.

You can find the latest specs for 'Peggy Sue Got Married' linked from our Blu-ray Release Schedule, where it's indexed under July 30.

Discs mentioned in this article: (Click for specs and reviews)
Peggy Sue Got Married (Blu-ray)