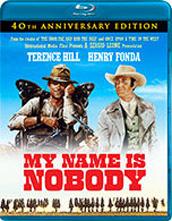 Blu-ray release of 'My Name is Nobody: 40th Anniversary Edition' Is on the Way!

The comedy western will be riding onto Blu-ray in November.

In an early announcement to retailers, Image Entertainment is preparing 'My Name is Nobody: 40th Anniversary Edition' for Blu-ray on November 5.

From western legend Sergio Leone ('The Good, the Bad and the Ugly') comes a rollicking shoot-`em-up! Young, ambitious gunman Nobody ('They Call Me Trinity's' Terence Hill) sets his eye on his idol, gunslinger Jack Beauregard ('Once Upon a Time in the West's' Henry Fonda), who's intent on sailing off into retirement. Deciding his hero should go out with guns blazing, Nobody sets him up for a showdown with a pack of the deadliest bad guys in the West, triggering an unforgettable finale that's become an action comedy legend!

Supplements have not been detailed yet, but the Blu-ray will feature 1080p video and a DTS-HD MA mono soundtrack.

You can find the latest specs for 'My Name is Nobody: 40th Anniversary Edition' linked from our Blu-ray Release Schedule, where it's indexed under November 5.

Discs mentioned in this article: (Click for specs and reviews)
My Name is Nobody: 40th Anniversary Edition (Blu-ray)