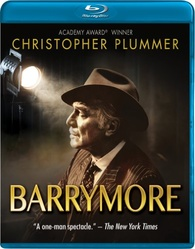 'Barrymore' Announced and Detailed for Blu-ray

The critically-acclaimed drama starring Christopher Plummer will be released on Blu-ray in May.

In an early announcement to retailers, Image Entertainment is preparing 'Barrymore' for Blu-ray on May 7.

Hot on the heels of Plummer's Best Supporting Actor Oscar for 'Beginners' last year, the octogenarian star of stage and screen delivers his most affecting performance yet. 'Barrymore' was released theatrically by BY Experience and Image Entertainment in New York and Los Angeles in November of 2012. The Los Angeles Times then enthused, "Christopher Plummer is a mischievous delight as the great John Barrymore, intent on a stage comeback." Barrymore was also recently nominated for two PRISM Awards including Performance in a Feature Film.

The screen version of the William Luce play by the same name, 'Barrymore' had its world premiere at the 2011 Toronto International Film Festival. It was adapted by writer-director Érik Canuel from the 1996 Broadway production for which Plummer won a Tony™ Award for Best Performance by a Leading Actor in 1997. Plummer, 82, has long had a fascination with the title character, and it shows. The Village Voice exclaimed, "Christopher Plummer re-creates his Tony-winning performance as the charming louse in his booze-addled final days. Blessed with a script that is witty, insightful to the workings of the narcissistic Hollywood psyche, and often wonderfully bitchy, the film is also a wistful look at faded dreams and opportunities lost due to both the vagaries of the business and self-sabotage."

Of Plummer's performance, noted critic Rex Reed proclaimed, "It’s the role—and the performance-- of a lifetime, and he plays every color, nuance, mood shift and variety of vocal power and body language in his enormous range. The artistry leaves you with your mouth wide open." Scott Feinberg of The Hollywood Reporter exclaims, "Christopher Plummer could be back in Oscar contention this fall for his portrayal of legendary actor John Barrymore." And the New York Times' Manohla Dargis succinctly sums it up with, "The performance is the thing."

You can find the latest specs for 'Barrymore' linked from our Blu-ray Release Schedule, where it's indexed under May 7.

Discs mentioned in this article: (Click for specs and reviews)
Barrymore (Blu-ray)