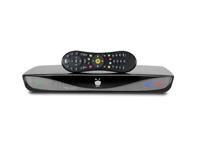 The company has revealed its new lineup of digital video recorders with streaming features.

The DVRs offer cable subscribers up to six tuners to record multiple shows at once, an updated interface, a new apps platform, an improved RF remote, support for many popular streaming services, up to 3TB of storage with up to 450 hours of HD recording space, and built in WiFi. The Roamio Plus and Roamio Pro also include TiVo Stream capabilities offering out-of-home streaming to watch your favorite programming on the go.