DISH has announced the arrival of the YouTube app on its Hopper 3 DVR. With the launch, DISH is now the first nationwide pay-TV provider in the US to offer YouTube on a set-top box.

"We designed Hopper 3 to be much more than a conventional set-top box," said Niraj Desai, DISH vice president of product management. "By aggregating apps like YouTube and Netflix with live linear television, Hopper 3 is capable of serving as a household's comprehensive entertainment hub." 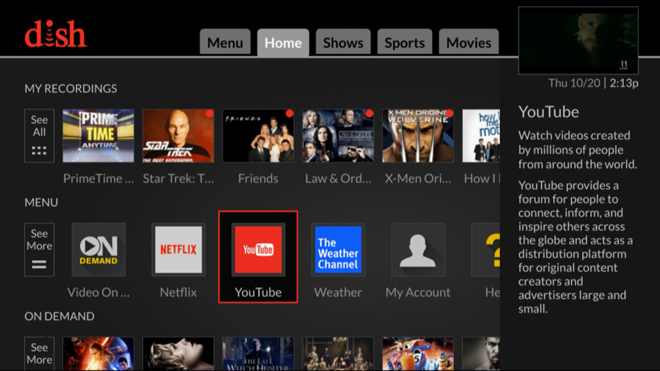 With the YouTube app for Hopper 3 DVRs, DISH customers can now search, browse, and play YouTube videos directly on their set-top box, allowing them to enjoy internet videos and traditional TV programming on the same device and input. Likewise, users can also log into their YouTube and YouTube Red accounts through the DVR as well. The app is now available on channel 371 or by selecting the "Apps" button on the Hopper 3 remote control. In addition, DISH customers can also cast content from the YouTube mobile app directly to their Hopper 3.

The Hopper 3 YouTube app was included with the device's latest software update. YouTube now joins a growing collection of Hopper media apps, including Netflix, Pandora, Vevo, and The Weather Channel.

Outside of new apps, DISH also recently released a new voice remote for its Hopper 3 DVR. The DISH voice remote features voice recognition, a clickable touchpad, and backlighting. The voice recognition technology can search for results based on program title, actor, or genre. Likewise, customers can also use voice commands for basic control functions like recording and changing channels. Meanwhile, the touchpad offers two modes -- a blank mode for navigation and a numeric mode with an illuminated keypad for entering in channels and passwords.