The show's first two seasons will hit Blu-ray in March.

'The Fall: Series 1' - Emmy and Golden Globe winner Gillian Anderson (The X-Files) smolders as a British detective summoned to Belfast to solve a high-profile murder. She quickly recognizes the signs of a serial killer, but the culprit (Jamie Dornan, Fifty Shades of Grey) has already targeted his next victim. Over five engrossing episodes, this psychological thriller follows both the hunter and the hunted as they attempt to outmaneuver each other in “an intriguing game of cat and mouse” (The Sunday Times, U.K.). Heralded as “one of the best BBC dramas in years” (The Guardian, U.K.), THE FALL proves as riveting as it is unsettling, granting rare insight into the mind of a sociopath. Critics rave that “Anderson is sublime, almost otherworldly, while Dornan. . . matches her for icy charisma” (Daily Mail, U.K.). The stellar cast also features Archie Panjabi (The Good Wife) and John Lynch (In the Name of the Father).

The Blu-ray will feature 1080p video, a DTS-HD MA 5.1 soundtrack, and supplements will include a 13 minute Behind the Scenes featurette. 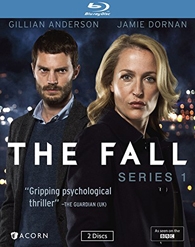 'The Fall: Series 2' - It’s been 10 days since serial killer Paul Spector (Jamie Dornan, Fifty Shades of Grey) fled Belfast, and Detective Superintendent Stella Gibson (Golden Globe winner Gillian Anderson, The X-Files) is running out of time to catch him. Then Spector commits a brazen crime to silence someone from his past, and Gibson finds crucial evidence that puts her hot on his trail once more. “An intelligent show with tremendous acting” (The Atlantic), this “harrowing yet riveting” (The Independent, UK) British drama has enthralled critics and audiences alike. Anderson mesmerizes as the strong, self-possessed detective, while Dornan proves disturbingly charismatic as Spector, a man who is both a sadistic killer and a loving father. With vivid characterizations and heart-pounding storytelling, The Fall is an unforgettable psychological thriller.

The Blu-ray will feature 1080p video, a DTS-HD MA 5.1 soundtrack, and supplements will include: Behind the Scenes; Deleted Scenes; and Photo Gallery. 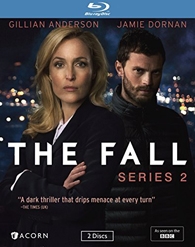