The first season of the sci-fi series will be heading to Blu-ray in March.

In an early announcement to retailers, Acorn Media will be releasing 'Humans: Series One (Uncut UK Edition)' on Blu-ray on March 29.

In the near future, technological advances have brought about the creation of life-like humanoid servants, called Synthetics—or synths—that help busy families simplify their lives. Joe Hawkins (Tom Goodman-Hill), disheartened by his wife, Laura's (Katherine Parkinson), distance, and his children's indifference, purchases a synth with the hope that it will ease the family's struggles. The synth, Anita (Gemma Chan) is an instant hit with Joe's children, but Laura can't shake her unease or the feeling that something is very wrong with Anita.

As the Hawkins family adjusts to life with Anita, retired synth engineer George (William Hurt) can't bring himself to get rid of his beloved, but malfunctioning synth, Odi (Will Tudor). And mysterious Leo (Colin Morgan) desperately searches for someone with his synth, Max. But why does Max seem different from other synths, and what secrets are the two holding?

Specs and supplements haven't been revealed yet, but the suggested list price for the Blu-ray is $39.99.

You can find the latest specs for 'Humans: Series One (Uncut UK Edition)' linked from our Blu-ray Release Schedule, where it is indexed under March 29. 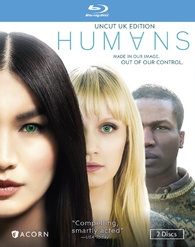