Four more mysteries will be heading to Blu-ray in March.

In an early announcement to retailers, Acorn Media is preparing 'The Brokenwood Mysteries: Series 3' for Blu-ray on March 21.

The Brokenwood Mysteries is set in a seemingly quiet country town where the newest resident, Detective Inspector Mike Shepherd, finds that murder lurks in even the most homely location. Each telefeature in the series is a standalone story which sees the show's two lead police officers working to solve a case.

In the third series, Mike and Kristin return to uncover more macabre events in the sleepy little murder-ridden town of Brokenwood. Once more, they're faced with quirky mysteries; a woman found dead under a giant foam spider; one corpse replaced by another; a classic car buff with a lungful of gasoline. Siphoning, or something more sinister?

Supplements have not been detailed yet, but the Blu-ray will feature 1080p video and a DTS-HD MA 2.0 soundtrack.

You can find the latest specs for 'The Brokenwood Mysteries: Series 3' linked from our Blu-ray Release Schedule, where it's indexed under March 21. 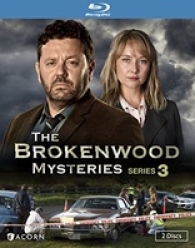