The Australian crime drama is coming to Blu-ray in February.

In an early announcement to retailers, Acorn Media is preparing 'Deep Water' for Blu-ray on February 14.

Based on a true story, this new, four-part Australian crime drama stars Noah Taylor (Game of Thrones, And Then There Were None), Yael Stone (Orange is the New Black), Danielle Cormack (Wentworth), and Dan Spielman (The Code). Detectives Tori Lustigman (Stone) and Nick Manning (Taylor) are assigned a brutal murder case in Bondi, where they begin to uncover mounting evidence to suggest the killing is connected to a spate of unexplained deaths, “suicides,” and disappearances of nearly 80 gay men in New South Wales throughout the 80s and 90s. Haunted by the disappearance of her teenage brother, Tori’s fascination with the case soon becomes a fixation. When more ritualistic murders occur with the same bizarre signature, Tori and Nick will need to put their relationships, careers, and lives on the line to finally reveal the truth.

You can find the latest specs for 'Deep Water' linked from our Blu-ray Release Schedule, where it's indexed under February 14. 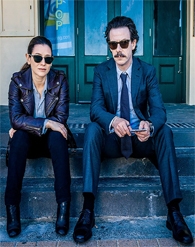 Discs mentioned in this article: (Click for specs and reviews)
Deep Water (Blu-ray)