Guardians of the Galaxy Vol. 2 in 4DX

With streaming and mobile entertainment options continuing to entice film fans thanks to their convenience and low cost, theater chains are once again starting to turn toward new premium cinema formats in an effort to offer a unique movie-going experience -- one that can't be so easily replicated on any mere smartphone or home theater setup.

But just what can a premium theater format offer that your everyday tablet or living room TV can't? Well, if you're IMAX or Dolby Cinema, you can provide notable improvements in big-screen visuals and immersive audio with state-of-the-art projection and sound systems.

And, if you're 4DX, you can provide… the smell of burnt toast?

But just how engaging is 4DX in practice? Do tilting seats and splashing water really enhance the viewing experience? Or are they just unnecessary gimmicks?

Well, to find out, we decided to check out a recent 4DX showing of Marvel's Guardians of the Galaxy Vol. 2 at the Regal E-Walk in NYC. Filled with exciting space battles and flashy VFX, the movie was a perfect example of everything the 4DX format has to offer -- both good and bad.

4DX is a premium motion picture format developed by CJ 4DPLEX. The tech first launched in South Korea in 2009 with the release of Journey to the Center of the Earth, and then expanded to US theaters in 2014 with the release of Transformers: Age of Extinction. 4DX is currently implemented in nine theaters throughout the US, including locations in New York, California, Florida, and Washington. To view all 4DX locations, click here.

4DX combines a typical digital 3D theater experience with the addition of motion seats and special environmental effects -- all specifically designed to work in sync with the action on screen. These 4DX tracks are programmed by the company's "i-Studio", creating a unique sense of immersion tailored for each individual title.

The format's motion seats are capable of vibration and combining three base movements: heave (up and down), roll (left and right), and pitch (tilt backward and forward), allowing them to simulate various actions like flying and driving. 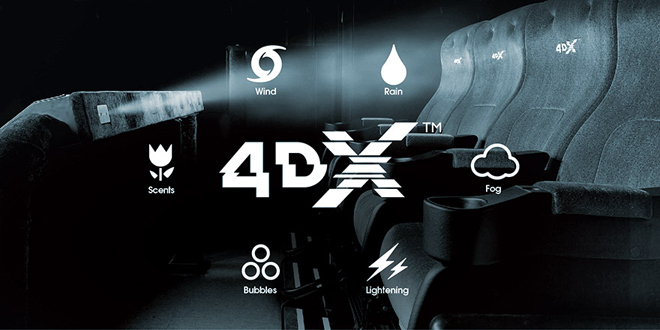 In addition, 4DX theaters are also fitted with various external effects via attachments on the walls and seats, including:

-Splashes of water to simulate rain.

-Leg and back "ticklers" to enhance action.

THE GUARDIANS OF THE GALAXY 4DX EXPERIENCE

When you sit down to watch a movie and notice that your chair has a "Water On/Water Off" button, you know you're in for a unique experience. And, for better or worse, that's exactly what Guardians of the Galaxy Vol. 2 in 4DX was.

First, let's start with the good. Two words: space battles. Evoking classic motion rides like Star Tours and Body Wars, the 4DX motion seats did a solid job of simulating a swooshing spacecraft during these sequences, tilting, moving, and vibrating the chairs in tandem with the action on screen. The effect is never as aggressive as actual theme park motion rides (no seat belt required) -- but the jolts are still powerful enough to make you spill your popcorn if you're not careful.

With that said, typical motion rides usually only last a few minutes, and having an entire feature length film employ the technique during every action scene did get a bit tedious and even uncomfortable over time. Thankfully, the seats mellowed out during standard dialogue heavy scenes offering a necessary break from the chaos. That is, with one notable exception.

Whenever the camera pushed in or tilted, the chairs would also slowly tilt and move along with the frame. Though this actually might sound like a clever idea on paper, in practice it proved to be quite annoying and ended up being my least favorite effect. 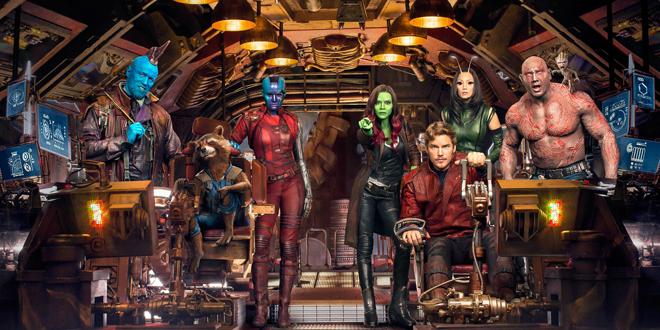 Other environmental effects were employed fairly well, but in general they all usually felt more like silly gimmicks than substantial enhancements to the experience.

Gusts of wind added a cool breeze to appropriate moments, fog rolled in here and there, and pops of air from the chair's headrest would often burst in tandem with laser blasts on-screen. Likewise, the chair would even occasionally tap my back. Well, "tap" might not be the right word. It was more like very lightly punch. This effect was primarily used when characters got smacked, but other uses occurred when Rocket leapt atop his enemies and Yondu's wandering arrow hit its targets.

Meanwhile, flashing bursts of light were thankfully used only sparingly, emphasizing a few explosions, space jumps, and fireworks here and there. And there was only really one main use of the infamous water feature -- spraying some drops during the opening fight scene when the alien creature's guts spilled out.

And though there is a scene perfect for fake snow, I don't remember actually seeing any in the theater -- but my tilting chair may have been distracting me. Likewise, while the smell of burnt toast was evident during a little promo video that played before the film, I didn't notice any scents during the flick either. And, most disappointing of all, there weren't any bubbles! 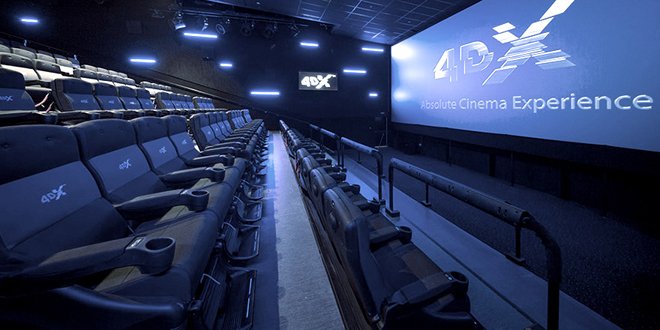 As a whole, I think the 4DX designers did a prey good job adapting the format to the action on-screen -- but I'm just not sold on the actual concept itself. Don't get me wrong, at its best, the 4DX motion and effects offered a few fun moments and enhanced a few action scenes with immersive seat movements. But at its worst, the process was downright distracting and mostly just came across as gimmicky.

Now, not everyone will agree with this assessment, however, and it looks like the film's own director, James Gunn, is actually a fan of the process. Check out the video below to hear his thoughts on the 4DX experience.

Compared to other premium theater formats, 4DX demonstrates some clear advantages and disadvantages. But just how well do motion seats and environmental effects stack up to Dolby Vision and giant screens?

Well, it's first important to note that while audio and video presentations are clearly secondary to the 4DX format's other unique attributes, the Regal 4DX theater I visited still had very good image and sound performance.

The 3D digital projector looked about as bright, sharp, and colorful as any standard projector I've seen before. With that said, the screen was nowhere near as big as a proper IMAX and black levels and contrast could not achieve the impressive inky look and HDR performance of Dolby Cinema.

Likewise, though the surround sound was engaging, the theater did not use a Dolby Atmos system, and even with the 4DX vibration, I think that the transducers used in Dolby Cinema seats actually provide a more robust sense of bass and kick during action scenes. 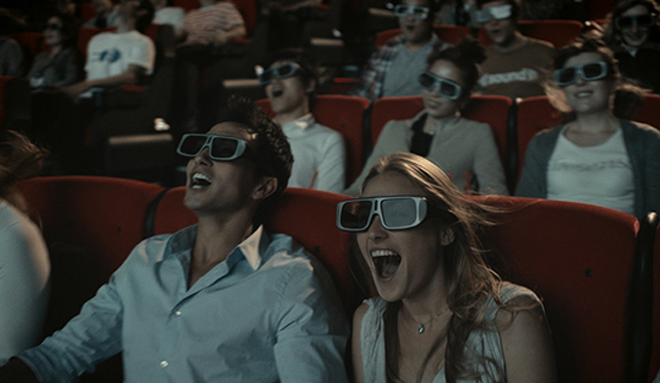 When it comes to 3D viewing, 4DX offered a slight edge over Dolby Cinema 3D presentations I've seen before, offering a seamless glasses-viewing experience free from any quirks. In contrast, the Rogue One Dolby Cinema 3D showing I saw previously featured a slightly distracting blue tinge toward the edge of the glasses -- something that was nowhere to be found here.

Also of note, is general comfort, and when it comes to that, typical IMAX seats and especially the nice reclining seats found in Dolby Cinemas are leaps and bounds better than the comparatively stiff 4DX seats. Of course, considering the hardware built into them and the inherent dangers that a potential reclining motion chair would bring, this is an understandable limitation.

At the end of the day, which format is best for you really depends on whether moving seats and splashing water are better for your viewing experience than a larger-than-life screen or Dolby Vision laser projection system with Atmos speakers. And though the novelty of 4DX's theme-park like features can be good for some fun, my current preferred theatrical format remains Dolby Cinema thanks to its emphasis on premium video and audio presentations.

Getting jolted around in your seat, splashed with water, and repeatedly poked in the back might sound like fun (or not) -- but in general, the 4DX experience is a bit overbearing and gimmicky. The effects were worked in pretty well with the film, but more often than not I just wanted to watch the movie in peace.

Still, a few sequences (particularly the space battles) provided some genuinely fun motion ride thrills. And at about $25 per ticket at the NYC Regal, the cost is similar to other premium theater offerings. While this definitely isn't a format I plan to experience regularly, if you're looking for a little something different with your movie-going experience, 4DX might make for a fun novelty once or twice. Just be sure to hold onto your popcorn.

Guardians of the Galaxy Vol. 2, Alien: Covenant, and King Arthur: Legend of the Sword are now playing in select 4DX theaters worldwide, with Pirates of the Caribbean: Dead Men Tell No Tales set to open in the format next week.