The Luxury Technology Show is an annual series of invitation-only showcases for high-end gear. Basically, it's a way to get media and potential customers in a room with a plethora of tech companies presenting all sorts of the latest and greatest gadgets, A/V electronics, and accessories. And while not everything applies for HDD readers, there are always a few new toys in attendance worth a look.

I've been holding off on upgrading to 4K in hopes of the technology progressing far enough for prices to fall a bit and so as not to get stuck on the wrong side of a technological divide (looking at you HDCP 2.2). The 2015 Luxury Technology Show had five display brands and one projector company on hand for demos, mixing together OLED, LED, 4K and 1080p resolutions. [Please note that these event images should not be used to judge the performance of any of these displays] 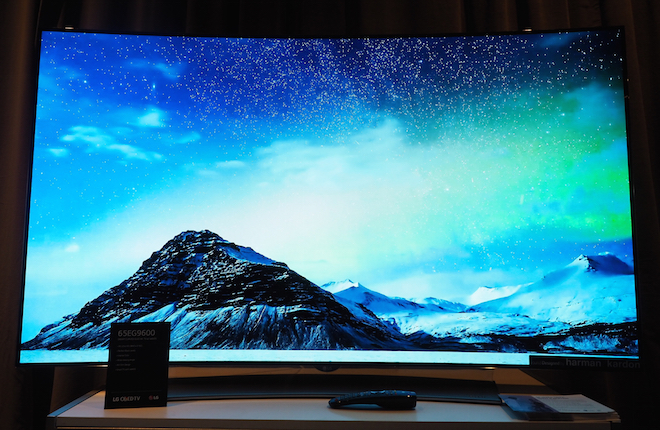 Wow. Just wow. It comes as no surprise that the most expensive TV was also the best looking. The curved LG 65EG9600 4K OLED (also available in the flat EF9500 series) is a visual stunner. Plasma-eating black levels give way to brilliant colors and what feels like infinite resolution. The secret behind this, LG claims, is the ability to illuminate (or turn off) individual pixels. In addition to 4K content, we also streamed a few minutes of 'Mozart in the Jungle' in 4K via Amazon Instant Video -- the production's muted color palette might not be the best demo material, but the image was clear and suffered from no banding or compression issues after a prolonged buffering period. However, I will say that sub-4K content did not upscale as well as I'd hoped, but further testing will be needed to get a better sense of this. As I write this article, the 65" 2015 9600 (curved) and 9500 (flat) series 4K OLEDs are currently selling for just under $5,000 on Amazon, while the 55" models (probably too small to benefit from 4K) will set you back just under $3,000.

Prices be damned. If this is the future of TV, sign me up. 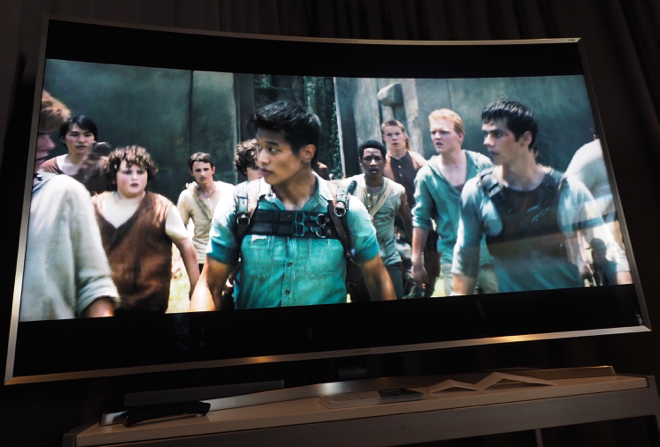 Samsung's curved 65" S9500 Series 4K LED was streaming 'Maze Runner' and 'Exodus' in 4K HDR via the MGO app. If 4K streaming looks this good, 4K Blu-ray's increased bit-rate should prove spectacular. Overall, the display presented solid black levels, good color, but suffered from some motion judder and compression artifacts (likely more a source issue than a display problem). And, for some reason, Samsung likes to demo this TV with AutoMotion Plus in the on position, which does an okay job, but still looks fake. The movies looked much better with all of those settings off. This display MSRPs for just under $6000, but is currently available for less than $4,500 on Amazon. 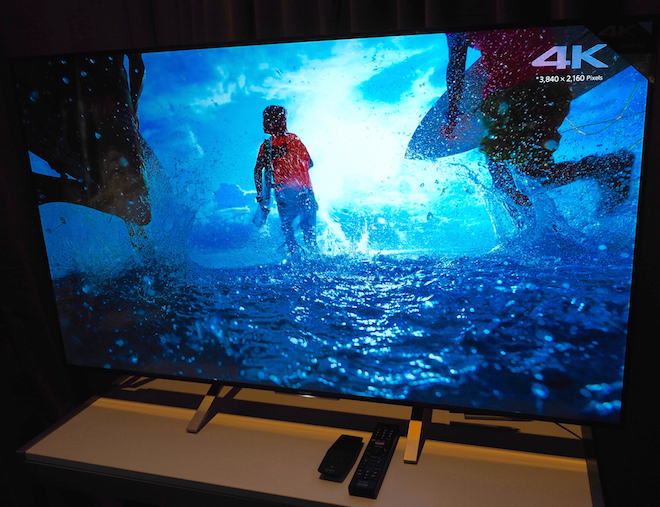 Sony's Android-powered X900C Series 4K LED is available in a 55" or 65" versions. Let me say that this TV is shockingly thin at the edges, though the power and processing components protrude further in the back. This display does HDR, offers a variety of streaming and other built-in apps, and, if you purchase it right now via Amazon, includes a $100 credit towards the purchase of 4K movies (also via Amazon). In my short time watching this display, it offered strong color and image fidelity. Current Amazon pricing for the 55-incher is just shy of $2,000, while the 65" model is a hair or two under $3,000. 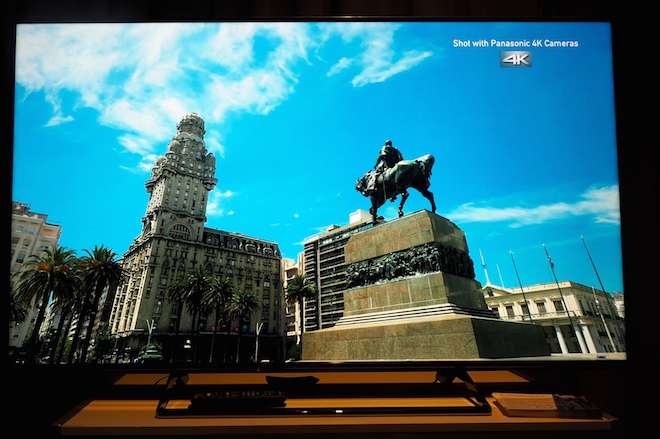 The Panasonic CX850 series 4K LED is available in 65" or 55" sizes. These models will get an HDR firmware upgrade once Ultra-HD Blu-ray launches, but already offer terrific colors and good contrast (it was playing 4K video from Panasonic's YouTube channel so the source material had some compression artifacts). Panasonic said they incorporate circuits from their pro-monitors to help with picture quality and upscaling non-4K content. As a VT series owner, I can't say this television matched the once-king-of-the-black-levels, but it was pretty darn close. Also, the Panasonic iOS and Android app is fantastic, allowing you to mirror your phone, throw content up to the display, and even calibrate your display on the fly without having any menus blocking a portion of the screen. The CX850 series is currently available from Amazon for just over $3,000 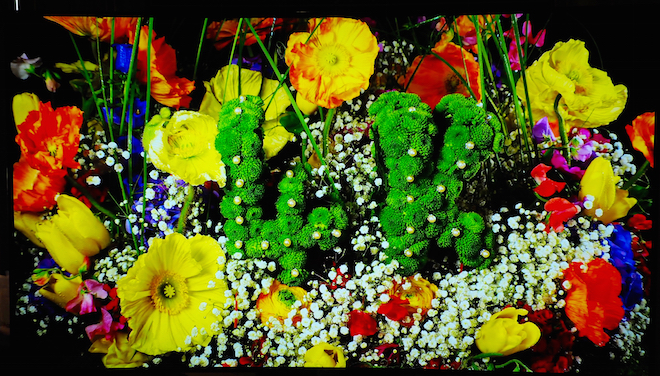 Mirage Vision is less a display manufacturer and more of a display upgrader. They take panels from other companies like LG and prep them for living outside in all sorts of extreme temperatures and weather conditions. For example, they are building units for customers in Dubai where they will function amidst sweltering heat. Mirage makes a variety of products for businesses and homeowners, allowing each customer to wall mount as needed, or even tuck into a portable hideaway-stand finished in various rock surfaces.

Mirage doesn't build a separate, bulky enclosure to protect its TVs. Rather, these panels remain nearly as slim as the original manufacturer versions, save for a few changes. Neoprene (think wetsuits) covers inputs, and specialized vent covers allow for the displays to breathe as needed. Basically, you get all the performance, style, and dimensions of a display you already know, but now it can live on your boat or in the outdoor bbq area or wherever you need an outdoor TV.

The king daddy of the Mirage lineup is their Diamond E Series, which just added a new Ultra HD 4K OLED to its lineup. In fact, it's the aforementioned LG 65EG9600 4K OLED panel wrapped into a new body that's been completely weatherized, which raises the price to just under $12,000. 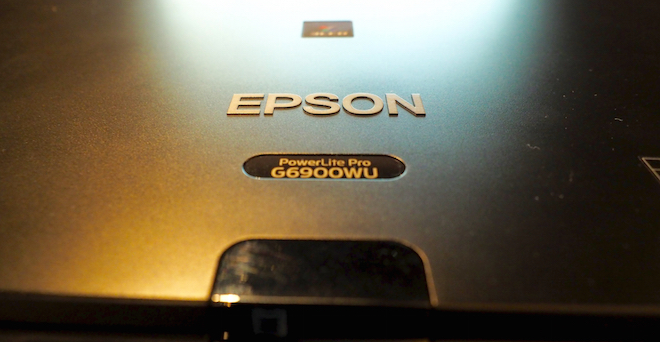 Prominent projector designer, Epson, brought two projectors to the party, though only one was running. The G6900WU series is available with up to 6,000 lumens (5,200 and 4,000 lumen versions are the other options) for just under $5,400 and is part of Epson's Ultra Bright Series of projectors. This Full HD 1080p model won't win any awards for black levels (the colors I saw projected on an off-white wall were dull and washed out with grey standing in for black), but this series is designed for rooms with more ambient light than many dedicated home cinemas.

Epson also had the Pro Cinema LS10000 laser projector, which offers "4K Enhancement" pixel-shifting technology to up-rez 1080p sources to 3840 x 2160. This 3-chip LCD laser system is capable of 1500 lumens at full brightness as well as zero lumens for absolute black, and can zoom between 4:3, 16:9, and 2.35:1 aspect ratios with the push of a button. Sadly, the conditions weren't right for a demo, but with companies like Dolby and IMAX pursuing laser projection systems, I can't wait to see one of these in person. As for price, the Pro Cinema series should cost around $6500, which includes an extra 30,000-hour lamp and an extended warranty.

While manufacturers are making their televisions and projectors smarter and more affordable every day, third-party devices continue to evolve in the ecosystem offering even more capabilities and functionality. 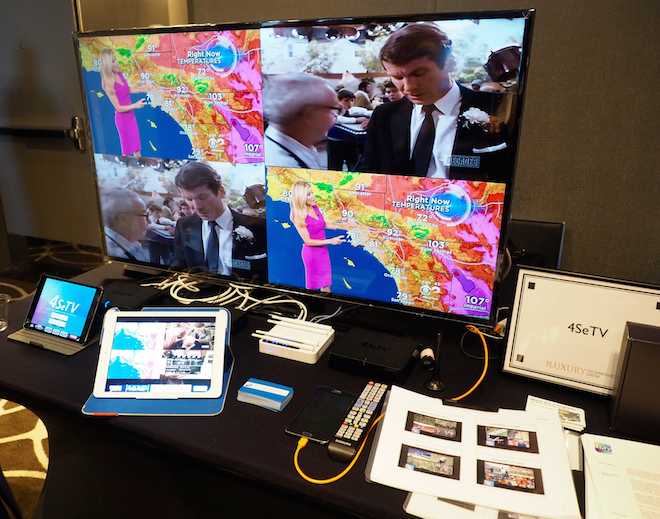 Here's an interesting device for sports fans who also live in an area with strong OTA HD broadcast signals. The $179 4SeTV allows you to watch up to four live HD broadcasts on an iOS or Android device, or any big screen TV. The perfect scenario is the weekend filled with multiple sporting events on local channels. It starts with the free app. Users select four channels to monitor and then either throw one or all four of those channels onto the big screen. The app provides the ability to arrange your channels in different split-screen positions as well as to select the audio source. For those with DirecTV, 4SeTV is very similar to the SportsMix channel, but utilizes more of the display's screen area and is user-customizable.

In the future, 4SeTV hopes to branch out into cable and satellite channels, but they are currently waiting for those companies to allow open access to their equipment. Either way, if you watch your local HD channels and find yourself constantly switching between sporting events, the 4SeTV might be a good fit for your man cave.

Next let's turn our attention to audio. We didn't run into any traditional, multi-channel home cinema gear at the 2015 Luxury Technology Show, but there were a couple Bluetooth Speakers worth a mention. 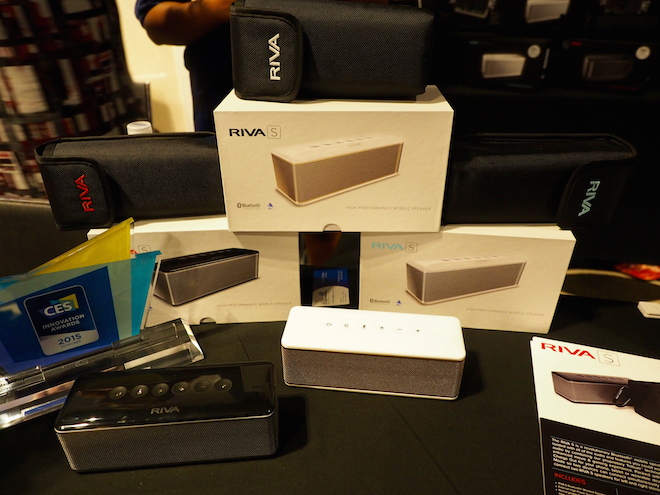 While we've already had our hands on the Highly Recommended Turbo X, premium wireless speaker-maker, RIVA, used the 2015 LTS to launch the new RIVA S Bluetooth speaker. "Designed to amaze", the S model is a compact, weather-resistant 30w speaker that weighs 1.5 lbs and can run up to 13 hours (@ 70 dB) on a single charge. In addition to music playback -- via 3.5mm, Micro-USB Type B, and Bluetooth -- the S also functions as a speaker phone and can be controlled with the free iOS/Android RIVA Audio App. There's even a Phono Mode that adds up to 9 dB of gain while bypassing the automatic gain control. And, it's possible to purchase two RIVA S speakers and wirelessly connect them for stereo sound. The RIVA S will debut later this month (October, 2015) with a $249 MSRP. 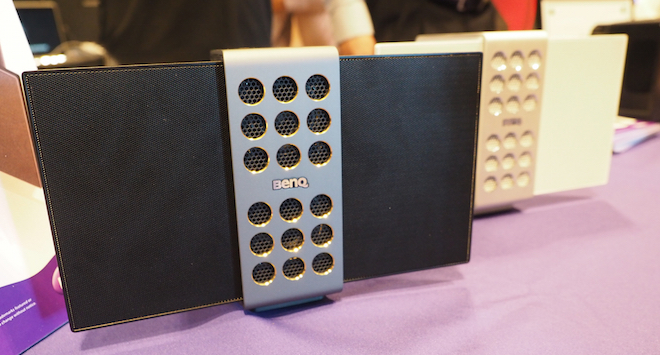 Most of us know BenQ for their affordable home theatre projectors and computer monitors, but they've also launched the world's first electrostatic Bluetooth speaker -- the treVolo. Trading coil drivers for electrically charged diaphragms, electrostatic speakers are known for their accuracy and clarity, particularly in the vocal and higher end frequency ranges. The treVolo costs $299, weighs 2.6 lbs, and includes a noise-canceling microphone for use as a speaker phone, three color-coded sound modes, and a 12-hour battery. Input connections include Bluetooth 4.1, Micro USB, and 3.5mm. It was too noisy in the LTS to do any sort of in-depth testing, but despite the crowd noise, this elegant little box with two flip-out speakers produces a surprising amount of sound (and even a little bass, something all but the largest Bluetooth speakers lack).