The romantic drama starring Idris Elba and Kate Winslet comes to both formats next month.

In an early announcement to retailers, 20th Century Fox says 'The Mountain Between Us' will hit Blu-ray and 4K Ultra HD Blu-ray on December 26.

Based on the book by Charles Martin and starring Academy Award™/Golden Globes® winner Kate Winslet & Golden Globe® winner Idris Elba, this movie is a must-see survival drama during which “you’ll be on the edge of your seat” (Andrew Freund, DishNation). Stranded after a tragic plane crash, two strangers must forge a connection to survive the extreme elements of a remote snow-covered mountain. When they realize help is not coming, they embark on a perilous journey across hundreds of miles of wilderness, pushing one another to endure and discovering strength they never knew possible.

Each release will feature a lossless 7.1 soundtrack and supplements include: Exclusive deleted scenes, behind-the-scenes featurettes, including, “The Wilds: Survival Stunts,” “Love and Survival: Creating Chemistry” and “Mountain Between Them: Shooting in Isolation.”

You can find the latest specs for The Mountain Between Us linked from our Blu-ray and 4K Release Schedules, where it is indexed under December 26. 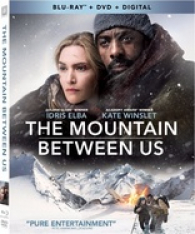 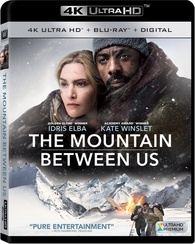