The adventure-comedy starring Amy Schumer and Goldie Hawn is planned for both formats this summer.

As previously reported, 20th Century Fox is set to release 'Snatched' on Blu-ray and Ultra HD Blu-ray later this year, and now the date has been set for August 8.

When her boyfriend dumps her, Emily, a spontaneous woman in her 30s, persuades her ultra-cautious mom to accompany her on a vacation to Ecuador. At Emily's insistence, the pair seek out adventure, but suddenly find themselves kidnapped. When these two very different women are trapped on this wild journey, their bond as mother and daughter is tested and strengthened while they attempt to navigate the jungle and escape.

Each release will feature a lossless 7.1 soundtrack and supplements include Deleted and Alternate Scenes, Gag Reel, and a Director's Commentary.

You can find the latest specs for 'Snatched' linked from our Blu-ray Release Schedule, where it is indexed under August 8.. 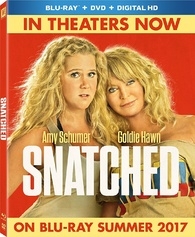 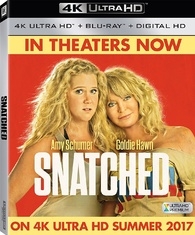