The critically-acclaimed film arrives on both formats at the end of the month.

In an early announcement to retailers, 20th Century Fox says 'Three Billboards Outside Ebbing, Missouri' will be available on Blu-ray and 4K Ultra HD Blu-ray on February 27.

Award-winning actress Frances McDormand (Fargo) delivers a stunningly powerful performance in this darkly comic drama that has been hailed as one of the year's best films. A murdered girl's defiant mother (McDormand) boldly paints three local signs with a controversial message, igniting a furious battle with a volatile cop (Sam Rockwell) and the town's revered chief of police (Woody Harrelson).

Each release will feature lossless 5.1 audio and supplements include: Featurette: "Crucify 'Em: The Making of Three Billboards" and Six Shooter (Short Film).

Check out the Red Band trailer (but not at work or if little ones are around):

You can find the latest specs for Three Billboards Outside Ebbing, Missouri linked from our Blu-ray and 4K Release Schedules, where it is indexed under February 27. 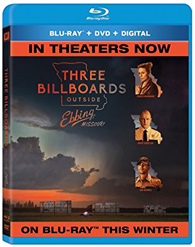 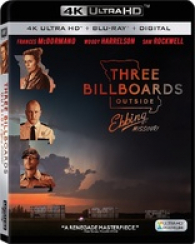